I've already written about Burger & Lobster here and here, from earlier visits (back when everyone - me included - was really excited about the idea of £20 lobsters, and willing to queue for hours for the chance to try one). Things have moved on a bit since then, and as I type this, there are now four branches of Burger & Lobster (Mayfair, Soho, Farringdon, and a brand new venue just off Cheapside in the City), and (*gasp*) some of them are taking reservations, even for small groups. 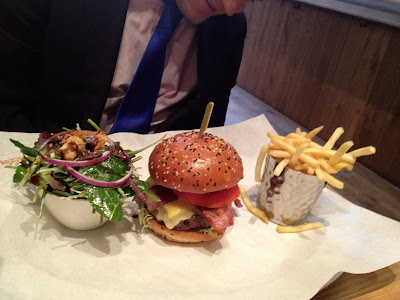 While I love lobster, and am really happy to not have to queue (the ability to book a table for 4 a couple of days in advance was much appreciated on this occasion) I do wonder if they might be over-stretching themselves. The concept of super-cheap* lobster seems to rely on having a high turnover of customers, and with so many B&Ls opening across London I can't help but wonder what might happen if they might start to see empty tables.

Anyway...hopefully this won't be a problem, as I'm still a huge fan (and their popularity doesn't appear to be waning as yet)! 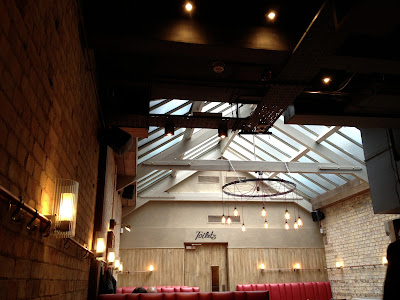 I walk past the Farringdon branch every day on my way home from work, so it was nice to finally eat there. The interior is high-ceilinged with the same stripped back style as the other restaurants. We had a good spot right by the open kitchen and got to see some cooking in action... 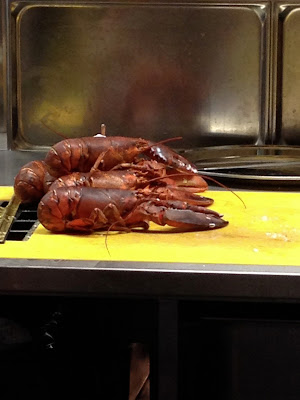 Three of my party opted for the standard B&L order of grilled lobster with garlic-lemon butter. Unfortunately I had a pretty bad cold and my meal didn't taste of anything at all (at first I thought there had been a serious slip in standards, but my friends seemed to be enjoying theirs, and really, I don't think it would be possible to make a flavourless garlic-lemon butter...so I think my cold was definitely to blame!) 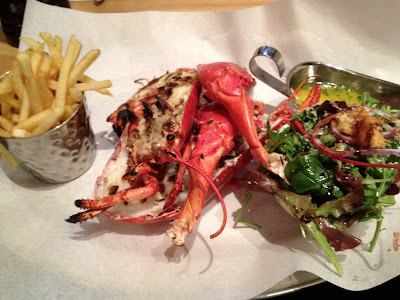 Because one of my work-friends is allergic to shell-fish he was forced to shell out (ha-ha) on a burger, so I finally got a chance to check out one of those mysterious creatures up close. As I had expected, this was good, but not worth £20. So the widely spread (and somewhat obvious) claims that the burger-eaters are subsidising the lobster-lovers seems to be correct...

I do still want to try the lobster roll, and I wouldn't mind checking out the City branch (which is less than 5 minutes from my office)...but then I might have a rest from Burger & Lobster for a while. 2012 "year-of-the-lobster" has been fun, but I can't wait to see what exciting foodie trends 2013 will bring!

*For London at least - a Canadian friend has informed me that he would pay $5/lb in Maine!