It's been absolutely freezing this week (hello snow!), so I've torturing myself by looking through holiday snaps from my trip to Andalusia last July. Gorgeous cities, great food, and temperatures in the high 30s. Bliss! 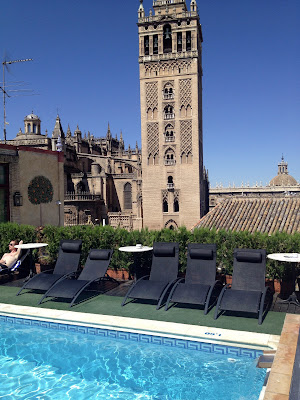 How much would I give to be here right now?

We skipped the coast, and decided instead to spend a couple of days each in Seville, Granada, and Cordoba. These beautiful, richly cultured cities had plenty to explore and - unlike the Costa del Sol - there was hardly a lobster-red Brit in sight (except for us, of course!) 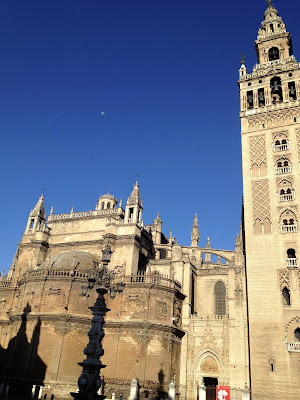 
We got up early each day to walk around in the cool of the morning, pausing to breakfast on pastries and freshly squeezed juice outside one of the square-side cafes. The temperatures didn't begin to peak until around 2 or 3 in the afternoon (and stayed excruciatingly hot until 6 or so), so we'd have a long, late lunch, then snooze in our hotel room for a couple of hours until it started to cool down. 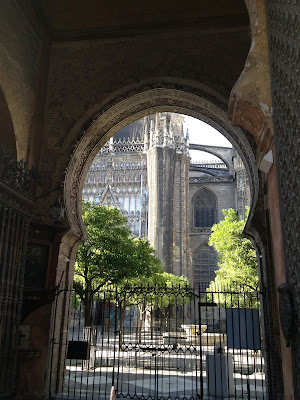 A key-hole view into the grounds of Seville cathedral

Post siesta, it was time for more exploring, followed by tapas and chilled wine at one of the innumerable tapas bars, before finally sitting down to dinner at around 10pm (which, by Spanish standards, was tragically early - we were eating with the youngest children, while most locals wouldn't venture out for dinner until 11 or even later!) 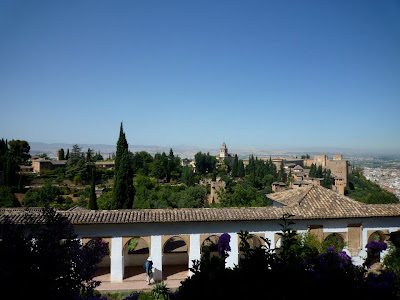 View from the palace of Alhambra in Granada

The locals were incredibly friendly (not to mention ridiculously attractive: the sunny squares were full of lithe, tanned beauties in teeny-tiny shorts and stunning young Spaniards with toned biceps and  sexy stubble). The relaxed, carefree way of life was so different from the "time-is-money" attitude of the City back in London, and we quickly unwound. 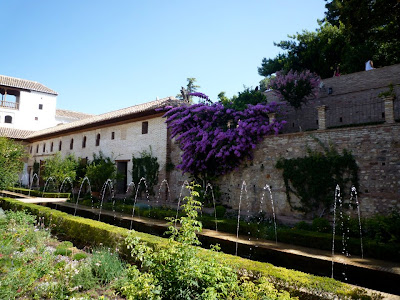 The beautiful gardens of Alhambra

Aside from the strenuous activities of 'wandering around' and 'lying beside a rooftop pool' we also did lots of eating. It was too hot for anything heavy - instead we snacked on tapas, light seafood dishes, and plenty of delicious helados (that's ice-cream, to you and me!). 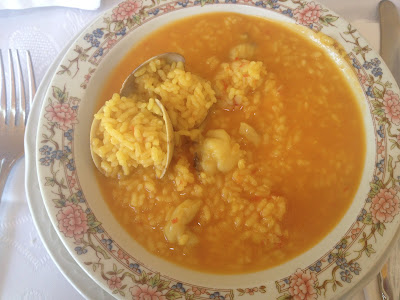 While I failed in my search for a 'perfect' paella,  this fantastic seafood, rice and tomato stew more than made up for it, and (despite not being especially photogenic) was my favourite dish of the trip. I've been trying - unsuccessfully - to recreate it ever since. 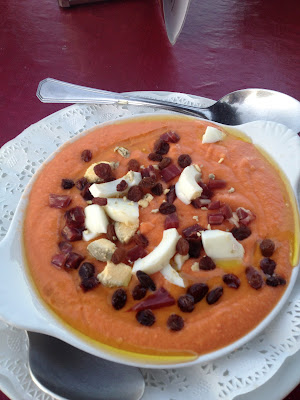 
Another tasty local dish was salmojero. Similar to gazpacho, this chilled soup is thickened with the addition of dried bread, and topped with chopped eggs, cubes of air-dryed bacon and a generous drizzling of olive oil - a refreshing (if somewhat rich) lunchtime snack. 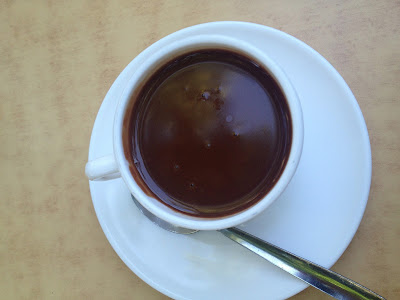 Why don't we make hot chocolate like that here?

And no trip to Spain would be complete without a cup or two of decadently thick Spanish hot chocolate. If you're feeling particularly gluttonous you can order some churros too: these long, thin donuts (which are delicious, if undeniably unhealthy) are dipped in chocolate as part of a traditional Spanish breakfast! 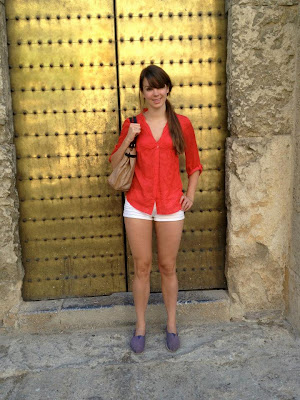 Happy - and warm! - in Cordoba

I'm heading outside now, preparing to face the blizzard in the name of getting some groceries. If anyone fancies escaping the snowstorm, the temperature over in Seville is currently in the mid- to high-teens...sickening.
Posted by Unknown at 02:52