Ice cream on a snowy day at Gelupo

It wasn't the most successful evening. We arrived at Pitt Cue at six on the dot, naively assuming we would get a table, only to find the restaurant and bar area to be completely full, and a line of 20 plus people already queuing in the snow.

Despite the crazily early hour, we then struggled to find anywhere else with a table nearby*. Finally, after 45 minutes of wandering (hungry and cold) around Soho, we ended up at Carom, a Pan-Indian restaurant which recently opened at 100 Wardour Street (in the same building as Meza Bar and Floridita).

The set menu - two courses for £10 - was extremely good value, offering a selection of modern, light dishes which included a (belatedly) festive starter of turkey tikka with cranberry chutney, and a deconstructed chicken korma main (a tandoor grilled chicken breast with an artful drizzle of cashew korma sauce). However, while good, it was not the BBQ I craved.

I was determined to save my evening by having the perfect dessert, so - in spite of the snow and sub-zero temperatures - I dragged my boyfriend to Gelupo. 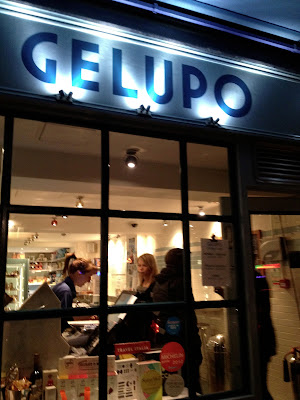 Gelupo has a reputation for serving some of the best gelato in London, and I've been keen to try it ever since my delicious birthday meal at sister restaurant Bocca di Lupo.

After chatting with the friendly girl behind the counter, I settled on a small cup of Bonnet gelato as the perfect post-meal treat. While this was not the most visually appealing ice-cream (as my boyfriend charmingly pointed out!) it was beautifully smooth, and boasted an incredible depth of flavour - a complex, multi-layered blend of coffee, chocolate, caramel, rum, amaretti biscuit and vanilla. Delicious. And on the Gelupo website they attribute the amped up flavours of their gelato to a lower-than-average fat content...which means it's healthier than usual too! 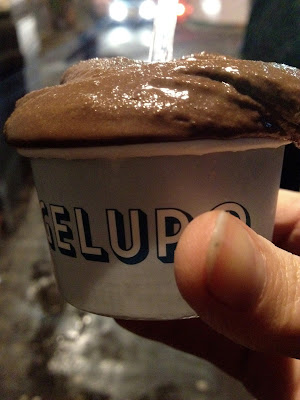 With an impressive range of innovative flavours (from the ricotta, coffee and honey gelato to bergamot and persimmon sorbets) I'll definitely going back in summer - if not sooner - to try some of their other offerings!


*I later realised this was because of pre-theatre diners - we probably would have been fine if we'd just thought to move away from the West End!