Brunch at the Breakfast Club, Soho

The other weekend some friends and I decided to fight off the January blues with a nice girly brunch at the Breakfast Club in Soho. While I've been to the Hoxton branch more times than I can count, and have checked out the diminuitive Angel cafe too, this was my first visit to the flag-ship venue in Soho and I was interested to see what it would be like. 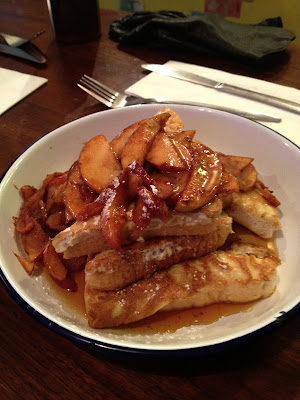 Upon arrival, the four of us were (somewhat unsurprisingly) greeted with a long, long queue. We stood in the cold, breath steaming, and wondered whether we should maybe try somewhere else. In the end, we stayed, and while it did take almost 45 minutes to get to the front  - the venue is small and the line didn't move particularly quickly - we were happy enough catching up and anticipating what we were going to have for brunch. The free shots of hot chocolate (brought out on a tray by a lovely waiter) definitely sweetened the wait too! 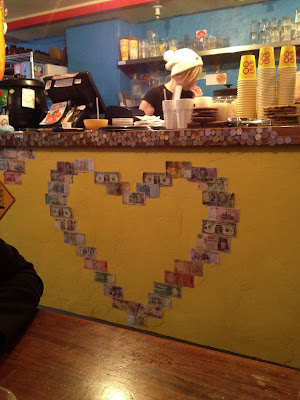 The Soho branch is much smaller than its Hoxton sibling, and while it sports the same colourfully eclectic decor, its cosy, comfortable vibe is more reminiscent of the Angel venue (making it the perfect place for a nice homely breakfast on a cold day). After our wait, we knew what we wanted, and quickly got stuck into ordering our food.

Two of our party went for the apple and cinnamon french toast. Light and fluffy, with just the right amount of egginess, this is seriously good. Topped with a generous heap of caramel-drenched apples and served with a big squeezy bottle of maple syrup, it's definitely worth trying if you've got a sweet tooth. 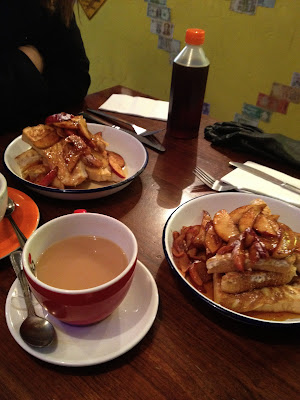 However, on this occasion I was in the mood for something a little more savoury. While there are a few interesting Mexican-style dishes on the Breakfast Club menu ("huevos al benny", "el butty" and the breakfast burrito are three dishes I've yet to try), I was pretty disappointed with the huevos rancheros I had on my last visit (too disappointed to even blog about it - soggy tortilla under too much sour cream and guacamole was not the best hangover cure!) so I went back to my tried-and-tested favourite, the "Half Monty". 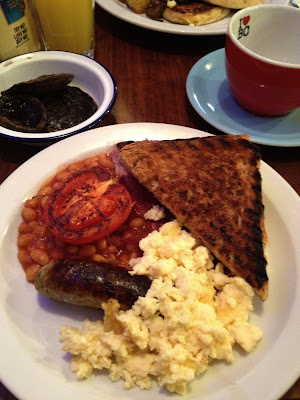 With sausage, bacon, beans, grilled tomato, eggs and toast, it has everything you could want from a breakfast...Well, almost - I ordered some mushrooms on the side too! As ever, this was immensely satisfying, although I think I may get fried eggs next time, as my scramble was a little dry...

My other friend went for the slightly maverick "Veggie All American" breakfast.We wondered just how huge this would be (the pancake dishes at the Breakfast Club are notoriously large, and a team effort is usually required to make a dent in the pancakes and bacon combo), but it was actually not too intimidating. Two modestly-sized pancakes were paired with home-fried potatoes, a veggie sausage, mushrooms, and eggs. It was quite a savoury selection for a pancake-based dish, but apparently very good. 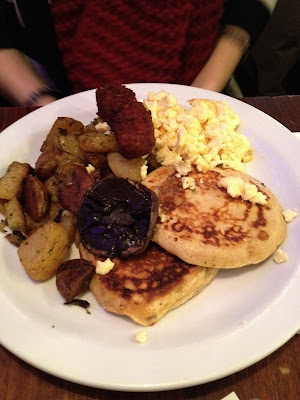 Selfishly, we lingered over our coffees...although we did feel pretty guilty looking out onto the queue outside, which if anything got longer over the course of our meal! While it was nice to try somewhere new, I still prefer the Hoxton branch (for the faster-moving queues, if nothing else) and will probably head back there next time. If you're in Soho though, and don't mind queuing, it's definitely worth a try!