If you're looking for something comforting to help fight off the January blues, this easy-peasy slow-cooker chicken soup may be just the thing. While it won't bring Christmas back (sorry, you still have to go to work tomorrow!), this healthy but satisfying meal is light on the pocket, light in calories, and may even help fight off that nasty cold... 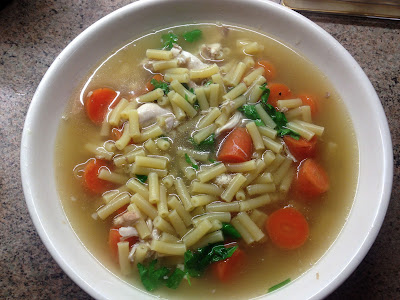 One whole chicken, around 1.5kg
500g of carrots, chopped into big chunks
One large onion, halved
Boiling water, to cover
Chicken stock, stock-pot, or stock-cubes (depending on what you have in the house!)
Salt and pepper
Flat leaf parsley, roughly chopped
Dried macaroni pasta, or any other small pasta (broken spaghetti strands also work)

This really couldn't be easier to make. All you need is a whole chicken, a bag of carrots (chopped into hearty chunks), and one large onion, halved. Place everything into the slow-cooker, season with salt and pepper, and add boiling water to cover your chicken (note: the top of my chicken was jutting out slightly, but this didn't seem to do any harm!). I added a Knorr's stockpot for extra flavour - if you prefer, you could use stock-cubes, or replace some of the water with chicken stock. 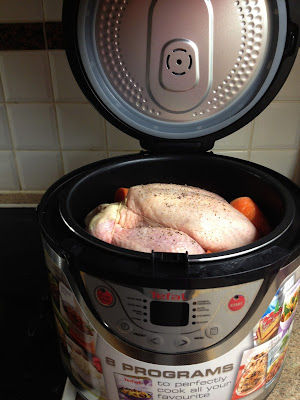 You may have to adjust the following instructions according to the model of slow-cooker you are using: I have a Tefal 8-in-1 multi-cooker*. This has only one slow-cooker setting (rather than giving you a choice between high or low) and a maximum duration of 9 hours, after which it switches automatically to 'keep warm' mode. I started the slow-cooking process when I left the house in the morning, and got back about two hours after it had ended: the soup was still steaming hot, due to the 'keep warm' function, and we didn't get food poisoning, so I guess there's no harm in leaving it in this mode for a while! 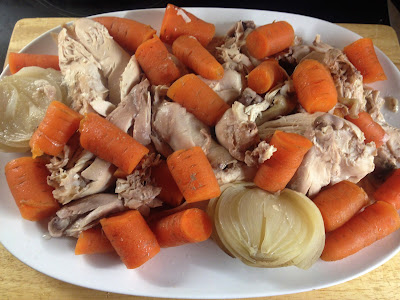 When I opened the slow-cooker I was met with a waft of mouth-watering steam (and - as it was the first time I've used a slow-cooker - was relieved to find that everything was cooked!). The chicken was ridiculously tender, literally falling from the bone when I took it out of the pot. I removed the chicken, onion halves and carrot pieces from the broth and set them aside, then poured the broth into a saucepan with some dried macaroni pasta, which I cooked according to the instructions on the packet (10 minutes in this case).

Meanwhile I shared the (de-boned and de-skinned) chicken and vegetables between two large bowls, and sprinkled everything with plenty of freshly chopped flat-leaf parsley. When the macaroni was done, I scooped ladlefuls of broth and pasta straight from the saucepan over the other ingredients, and served the steaming bowls of soup straight away. 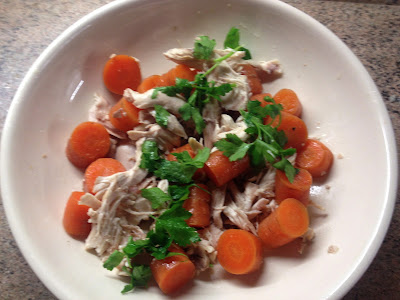 This recipe would easily serve 3 or 4 - although we managed to finish it between the two of us! It was delicious, healthy, easy to prepare, and - for those whose wallets are a bit lighter post-Christmas - incredibly good value (my free-range-but-not-organic/corn fed chicken was less than £6. Add another couple of quid for carrots, onion, stockpot, and a 1/4 pack of macaroni...and it still comes in at under £10!).

*I got this for Christmas, and this was my first attempt at using it, so apologies if I have any of the setting details wrong - I'm still figuring it out!
Posted by Unknown at 07:34