Burger and Lobster, at last...

I've been dying to eat at Burger and Lobster for months, but have always been deterred by reports of long queues and ridiculous waiting times. Finally - tormented beyond bearing by the borderline pornographic images of juicy lobster and succulent rolls circulating the internet -  I picked what I hoped would be a good time to visit (3pm on a Sunday afternoon, in the lull between lunch and dinner) and decided to brave the wait. 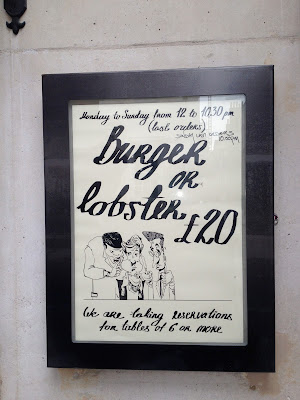 To my delight, we were seated straight away (yessss!) nabbing a table for two near the kitchen, where we watched open-mouthed (with greed and awe) as chefs prepared platter after platter heaped high with lobsters, burgers, and delicate lobster rolls... 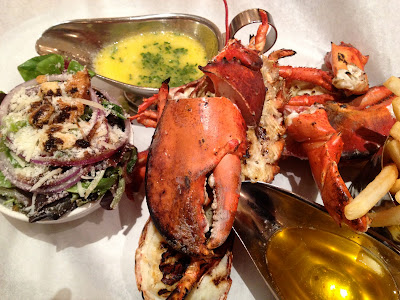 We'd planned to share a lobster roll to start. Consisting of a whole lobster (de-shelled of course) mixed with creamy Japanese mayonnaise and encased in a sweet brioche bun, this was a mouth-watering prospect...However, after observing the sheer size of the lobsters emerging from the silver hatch, we felt somewhat intimidated, and decided to skip the 'starter' and go straight to the main event: burgers (JUST KIDDING, obviously we went for lobster!). 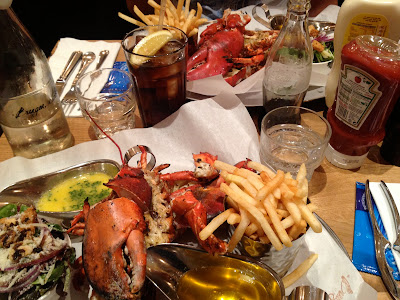 The lobsters come grilled or steamed, alongside a silver tureen of plain or garlic-lemon melted butter, or both (go for the latter - my boyfriend only ordered plain butter and ended up stealing half of mine!). While I can't comment on the steamed version (we both ordered our lobsters grilled), I found the slight smokiness of the grill to enchance the flavour of the sweet lobster meat, and will definitely be ordering it this way again next time. 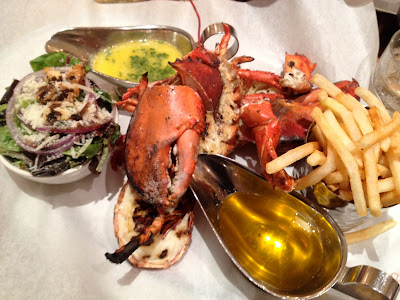 The garlic-lemon sauce, a vivid buttercup yellow, was simply glorious - sharp lemon cutting through the richness of the butter, under a mellow haze of garlickiness - and was perfect for the dipping of tender, sweet lobster flesh. 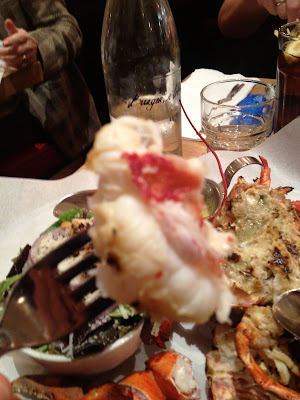 
I had worried about the mechanics of eating lobster at a small table - previous attempts at de-shelling lobsters have been strenuous affairs, requiring copious elbow room - but this time it was, somehow, incredibly easy. Succulent lobster flesh parted easily from the brilliant red shells, and the silver pick and claw-cracker were barely used (unlike the wet wipes, which definitely came in handy at the end of the meal!) 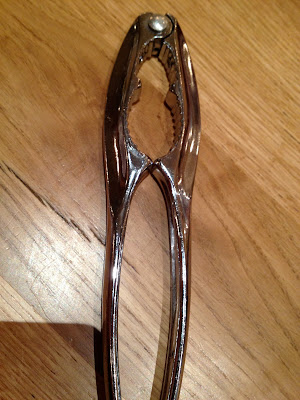 The sides were also exemplerary: french fries, served in a little silver bucket, were fantastic (especially dipped in the remnants of the lemon/garlic sauce...mmmmm*) with a few lovely soggy ones in the middle (my favourite!). Unfortunately I couldnt make much of a dent in these after my enormous crustacean (although I'm not complaining: there's nothing quite as luxurious as being painfully full on lobster!). And after the butter-sauce and chips, the dish of salad was very welcome: topped with croutons and sliced onions it was a refreshing break from the rich-buttery-sweetness of the rest of the meal. 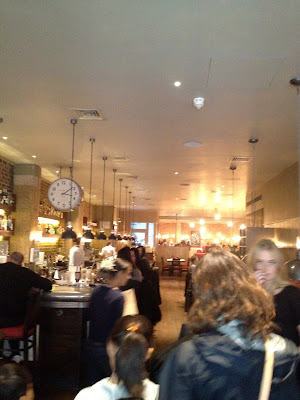 All in all, this was a fantastic experience: I went in with ridiculously high expectations and was still pleasantly surprised. This was the kind of meal that you would expect to pay (at least) £50 for, and at only £20 each, you really are getting a special occasion treat at everyday prices.

So, in conclusion - believe the hype. Go here. Then go again. I know I will**!

*Health warning: do not try this at home...
**I can't wait until the EC1 branch opens (literally midway between my office and my flat!). My sneaky plan is to put my name down for a table on my walk home, then come back later for dinner(sssss)!
Posted by Unknown at 10:28