A fancy french dinner for a special occasion

Five years ago last Tuesday, my boyfriend and I 'officially' started going out*. To celebrate having put up with each other for so long, and to distract from how tragically old this made us (read: me) feel, I decided to prepare a special dinner to mark the occasion. 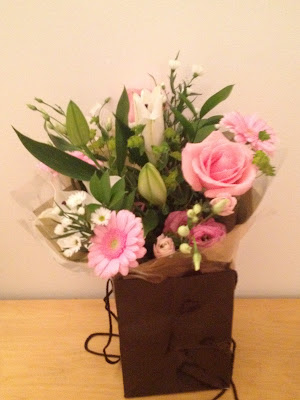 Occasions like this are the perfect opportunity to try something new in the kitchen - with just the two of us, there's less pressure than a dinner party, both in terms of scale, and expectations (after five years the relationship is unlikely to suffer excessively from a culinary mishap or two!) - so with that in mind, I decided to try a few new things. 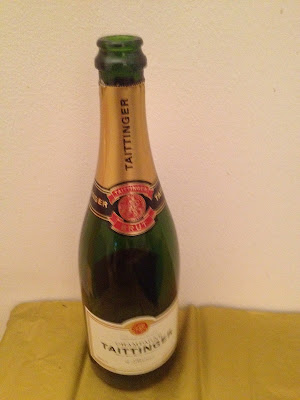 I chose a 'french-ish' theme for the menu, although this was derailed somewhat by my boyfriend's insistence that we have banoffee pie for dessert**.

Given the number of recipes involved, I'll split this post into three. So, to begin at the beginning, let's talk about the starters:


The frisee salad was relatively simple to make. Aside from caramelising the pecans and mixing up a vinaigrette, it really only involved layering everything onto a plate. 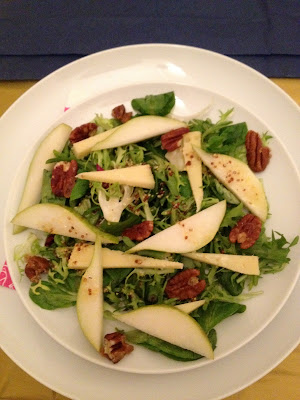 1 pear (this should be ripe - mine wasn't)
Cheese (something which goes well with pears - most recipes call for blue cheese, if you're into that!)
Frisee salad leaves
Caramelised pecans
Grain mustard vinaigrette

I was a bit disappointed in the cheese - I bought it from a stall at Borough Market over the weekend, and had specifically asked the man on the counter for something that would go well with pears, but it wasn’t quite right. I'm not sure what it was actually called, but it was a hard cow’s milk cheese, quite strong and salty; somewhere between gruyere and pecorino.

The caramelised pecans were a bit more successful, adding a pleasant sweetness to the salad. They were especially lovely when included in a mouthful with pear, salad leaves, and grain mustard vinaigrette. 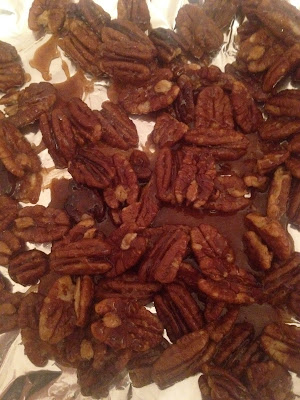 Ingredients
(Note: this makes waaay more pecans than you need for the salad - but the leftovers are pretty tasty!)

Add the butter, sugar and pecans to a saucepan, and heat until the caramel is smooth (that is, when all the sugar is fully dissolved) and has taken on a rich brown colour. Spread the caramelised pecans onto a layer of tin foil to cool, then store in a airtight container in the fridge until ready to use.

These seem to keep pretty well - I made them the day before my salad, and took the leftovers in to work the day after that, and there was no noticeable deterioration in texture or taste.

I went with a grain mustard vinaigrette, but this would probably also be nice with a sweeter dressing - I saw some pear salad recipes which used maple syrup in their vinaigrette, which could be nice.

Mix a heaped teaspoon of grain mustard with equal parts olive oil and vinegar. Whisk together with a fork, and you're done.

To assemble your salad, start with a layer of frisee salad leaves. Top with slices of pear and  cheese, sprinkle with the caramelised pecans, and drizzle with vinaigrette.

This is a simple starter: it's not too filling, and served nicely as something to whet the appetite before the cream fest to come (what with the souffles, dauphinoise potatoes, and bannoffee pie, I used a LOT of cream in this meal!) 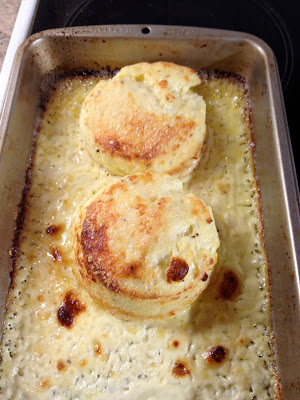 The double swiss souffles were the stars of the show. I have had these once before in a restaurant, and loved them, but have always been too scared to attempt a souffle myself, let alone a 'double' souffle...In fact they were laughably simple to make:

I used the recipe from Mary Berry's Complete Cookbook***. It's worth reading it through before you start, as everything needs to be done at once, so it definitely helps to have done some preparation before you put make the roux!

Ingredients
(Note: the original recipe serves six, so I scaled it down to serve the two of us)

You will also need: 2 ramekins, a small roasting tin (to serve as a bain marie) and a shallow oven proof dish.

Step 1: Melt the butter in a non-stick saucepan, add the flour, and stir together for one minute. Remove from the heat and gradually blend in the milk, before returning to the heat and bringing the mixture to the boil, stirring until it thickens.

Step 2: Remove the pan from the heat and stir in the grated Gruyere cheese and the egg yolks (make sure you stir quickly so the egg yolk doesn't start to cook!)

Step 3: Whisk the egg white until it forms stiff peaks. Stir 1 tbsp into the mixture, before folding in the rest.

Step 4: Generously butter two ramekins, and divide the mixture between them. Place the ramekins into your small roasting tin and pour boiling water into the tin until it comes half way up the sides of the ramekins.

Step 5: Bake the souffles in a pre-heated oven at 220C (200C if you have a fan oven) for 15-20 minutes until golden and springy to the touch (mine were done after 15 minutes). Leave the souffles to stand for 5-10 minutes; they will shrink by about one third. (I left mine for 5 minutes, because I'm impatient!)

Step 6: Butter your shallow oven proof dish. Sprinkle half your parmesan cheese over the bottom of the dish. Run a knife around the edge of each souffle, then carefully un-mould them onto the parmesan layer.

Step 7: Season the double cream with salt and pepper, and pour over the souffles. (Note: if your dish is too large, you may need extra cream to cover the bottom. I topped mine up with some single cream, just to stop everything from drying out. If you're making six souffles with 300ml cream, this probably won't be a problem) Sprinkle the remaining parmesan over the top and return to the oven for 15-20 minutes until golden.

Mary Berry serves her souffles garnished with chopped chives: my boyfriend hates them, so I missed this step out. 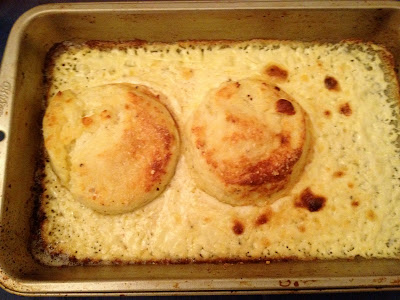 OK - so one of them collapsed a little. Still, not bad for a first attempt!

So - there were my starters! Recipes for main course and dessert to come...

*we were 18, so by official, I of course mean "facebook official". If it's not on facebook, it doesn't count...

**disappointingly, as my addiction to The Great British Bake Off has had me itching to try my hand at choux pastry

***This really is a fantastic cookbook: with almost 500 pages of recipes, it covers a huge array of different dishes, and is incredibly handy to have on your kitchen shelf!
Posted by Unknown at 23:54