I have wanted to try the afternoon tea at Claridges since I first moved to London, over two years ago now. So why did it take me so long to finally go? Two reasons. Firstly, at £39 for what is effectively a very fancy afternoon snack, it's not exactly cheap, and I needed to earn some money first. And secondly, you have to book ridiculously far in advance to get a weekend spot...and while I'm pretty organised, it seems almost pathological to know what you're doing twenty weekends ahead of time.

Having given up once before and gone to The Connaught instead (which was lovely, and more importantly, only needed a mere (!) six weeks' advance notice) I finally ended up having afternoon tea at Claridges last weekend.

My friend and I had booked (three months in advance, I might add) for the relatively late 5pm slot. The cakes may be dainty, but you do get a huge amount of food at an afternoon tea (especially if you take advatage of the free refills), and to make it worth the money - and to save room for all the tasty food - it's a good idea to have it as the main meal of your day. So, after preparing our stomachs with a tiny lunch and a drizzly but appetite-building walk across London, we were good to go. 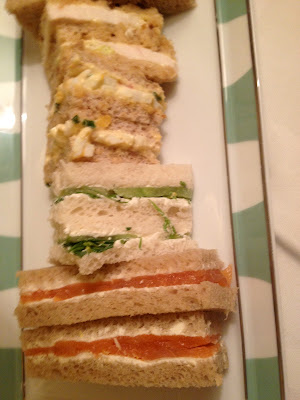 Shaking off our umbrellas outside the door, we entered the grand lobby, where we were directed to the cloakroom to 'freshen up' before our meal. The cloakroom at Claridges is worthy of a visit in itself: decorated in a delightful art deco style, it features frescoed walls, wood-panelled toilets, and a whole row of dressing tables for touching up your make-up.

Fully refreshed, we headed to the Reading Room to take our seats for the afternoon tea. High-ceilinged and softly lit, the Reading Room is also decorated in full art deco style, with elegant archways and intricately carved pillars lining the walls. The atmosphere was lovely: live piano music tinkled away for the duration of our meal, while other diners clustered happily around little tables, engaging in relaxed conversation over pots of tea and delicate cakes.

Our meal began with an introduction from the waiter, who assisted us in choosing from the vast selection of teas listed on the menu. After some consideration, we both opted for the special jubilee blend. A fairly traditional black tea, this wasn't the most adventurous choice, but was a lovely accompaniment to our food.

With our tea, we were served with the first course of the afternoon tea: a plate of tasty finger sandwiches. Ham and mustard sandwiches were very good: cut into rectangles, with soft bread encasing a thick and tasty wedge of cured ham, these were light but satisfyingly meaty. Smoked salmon with cream cheese was also lovely, although my favourites were the little triangles filled with deliciously creamy smoked chicken and egg mayonnaise. The only weak point for me were the cucumber and cream cheese sandwiches: bland and soggy, I've never really understood the appeal of cucumber as a sandwich filling. However, my friend (who is more refined than me) thought they were very nice!

When asked if we would like refills, we (of course) were happy to accept, and contentedly nibbled away on a second plate, although - aware of the need to save room for the oncoming sweets - we didn't quite get through the full batch*. 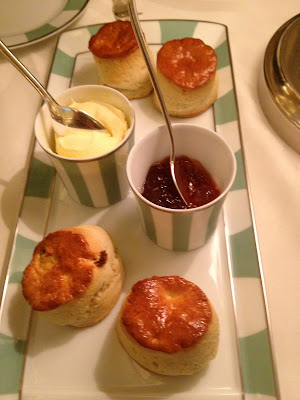 Next up were the scones and cakes. Four miniature scones - two apple and two raisin - were served warm with a pot of gorgeously thick clotted cream and a delicious Marco Polo tea-infused jam. Split down the middle and slathered with both toppings, these were delicious, and their dainty size made them very maneagable (OK, I admit it...so maneagable we ordered a refill!).

The tray of cakes arrived at the same time as the scones and featured a good variety of treats. 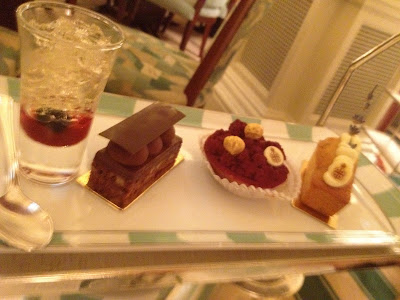 Champage jelly was served in a shot glass, above a layer of berries.The clear jelly had a surprisingly strong champagne flavour, and was very refreshing (although somewhat difficult to share!).

Next up was a slice of dense, incredibly rich chocolate cake. Topped with three semi-spheres of mousse and a thin layer of chocolate, this was fudgy and intensely chocolately: delicious but perhaps a bit too rich for my liking (especially alongside all the other sweet treats!).


The berry tart was also delicious, with a tasty berry filling encased in delicious short-crust pasty and topped with a crumble topping (stained a rich velvet red) and a scattering of hazelnuts.

The final treat was a miniature loaf of lavender-scented sponge. Topped with a swirl of tasty buttercream, this had a lovely crumb and a delicate floral flavour.
With our refill of scones, we received two more slices of the chocolate gateau. Caught up in greed I ate mine, despite being beyond full at this point...and as punishment, ended my meal feeling a bit sick! In spite of that, this was a fantastic experience, and one I hope to repeat some time in the future. Despite the price, the afternoon tea was actually pretty good value: the service was excellent, the atmopshere was great, and as well as serving in place of a main meal, it filled me up for most of the next day too.

*The one annoying thing about afternoon tea is that you don't seem to be able to go back and forth between sweet and savoury - a few bites of our left-over sandwiches would have been a welcome break from the scones and sweet pasties later in the meal, but sadly our unfinished plate was cleared away...
Posted by Unknown at 04:11