Banoffee pie to win (or keep) a boy's heart

As I mentioned in my previous post, my boyfriend insisted on ruining the french theme of my home-cooked anniversary dinner by having banoffee pie for dessert. Since it's his favourite (and because I'm a lovely girlfriend!) I relented... 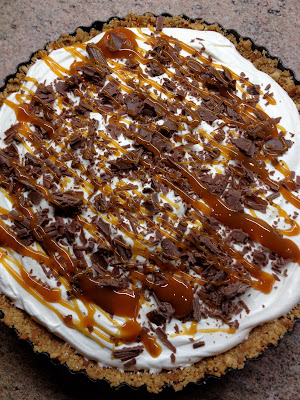 I've had some issues with banoffee pie before, but this one turned out perfectly, and I picked up a few tricks that I'll definitely be using next time. Firstly - I prepared the base a day in advance and froze it overnight. This made a huge difference when it came to assembling the finished product: in the past, I've always struggled with the crumbly base sticking to the banoffee layer and getting all mixed together in the 'spreading' stage. This time, with the base frozen solid, the sticky toffee went on as smooth as anything. This was further helped by my second trick - warming the toffee in the microwave for 30 seconds or so before using it (I made the toffee the night before too, and after 24 hours in the fridge it was pretty stiff).

Galaxy ripple, Cadbury's flake, or other crumbly chocolate
Caramel or chocolate sauce for drizzling
[In the past I've used chocolate powder, or a layer of maltesers. Go wild!]

400g can of condensed milk

The 'offee' layer is as easy as anything to make - all you need is one 400g can of condensed milk. Put the unopened can into a saucepan of boiling water, ensuring that the water covers the can (this is important - if too much water evaporates, the tin may explode!). I recommend putting a lid on the pan if you don't want your kitchen to fill with steam.

Check the level of the water every 30 minutes or so and top up from the kettle as needed. I find that boiling the can for around 2 1/2 hours gives me the consistency I want for banoffee pie - leave it for half an hour longer if you want a stiffer toffee, or for half an hour less if you want a runnier caramel sauce (for example, to use it as ice-cream topping). 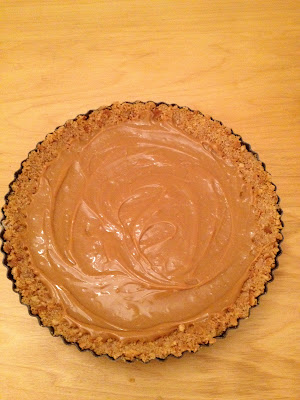 You can complete this step a few days before - simply transfer the toffee from the tin into an airtight container and leave it in the fridge until you're ready to use it. I've heard of people boiling up a few cans and keeping them in their cupboard for future use, but this sounds a bit dodgy to me!

Crush the biscuits (hopefully you have a food processor or blender to do this - mine is broken so I spent 20 minutes crushing biscuits by hand. The only benefit of this was that my hands became super-soft from the exfoliating and moisturing effect of greasy biscuit crumbs. Other than that, this was extremeley tedious, so avoid it if possible!). 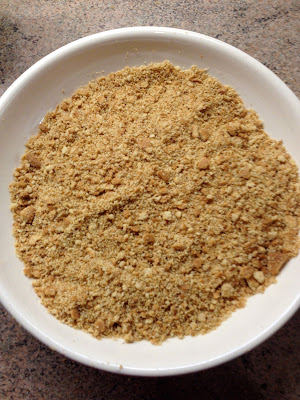 Melt the butter in the microwave and stir into the crushed biscuits. Spread the resulting mixture into a 10-inch diameter pie tin, and press it firmly into the base and around the edge of the dish to make the crust of your pie. 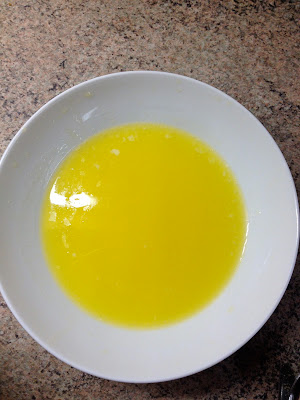 Place the pie tin into the freezer and leave overnight (or for an hour or two if you're making this to eat on the same day). 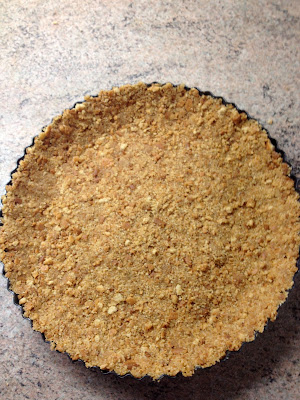 Whip the cream and icing sugar mixture until it forms smooth peaks. I did this with a hand-whisk. Again, if you're lucky, your kitchen will be better equipped than mine and you can use an electric one! 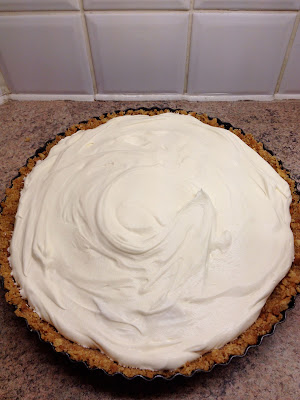 Slice the bananas into rounds, roughly the thickness of a pound coin. If you're using immediately, this is all you need to do. If you're waiting before assembling (even 5 minutes or so), then put a drop of orange juice or a squeeze of lemon into the bowl - this will prevent the slices from going brown. 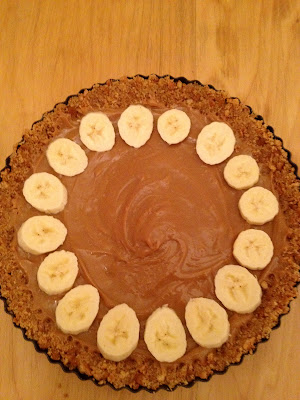 Step 5: Putting it all together

Warm the toffee for 30 seconds in the microwave (or until just warm - you're aiming for body temperature and slightly gooey here, rather than hot and runny!). Using a large metal spoon, spread this in a thick layer over the frozen base (remove the base from the freezer just before assembling your pie). 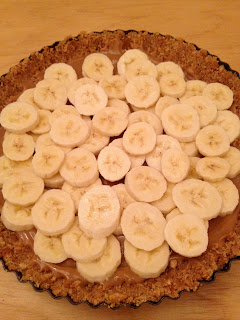 Place the banana slices onto the toffee - neatly or messily, it's your call (I started mine in a tidy circle pattern, but got bored - once the whipped cream is on top, who's going to know?!) Spoon the whipped cream on top, then decorate as you wish. I crumbled a galaxy ripple over the top, and drizzled with some caramel sauce (I cheated and bought this in a bottle - you could use some of the condensed milk toffee, but mine was a bit thick for drizzling!)

Keep your finished banoffee pie in the fridge until you're ready to serve.

Another tip - with just the two of us (and after a big meal) we barely made a dent in this. And given the creamy, gooey nature, it's not the easiest thing to take into work to share the leftovers. Instead, I cut it into neat slices, and spread these around the tin (so that they wouldn't freeze together). Then I simply popped the leftover pie into the freezer, for future consumption. 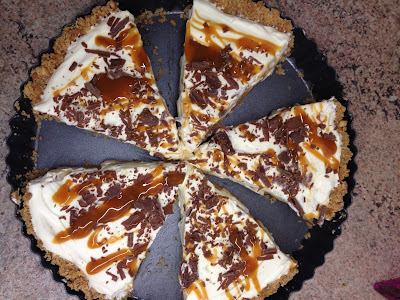 When you're in the mood for more pie, simply take the slices out of the freezer an hour or two in advance and leave on the side to defrost. (Even when it's not quite thawed, it's still pretty tasty! Banoffee pie ice-cream, yum!)
Posted by Unknown at 00:52