For the main course of my home-cooked anniversary dinner, I had wanted to make steak aux morilles. This was one of my favourite dishes during my two-year stint in Geneva, when my family made regular trips to a nearby bistro to devour juicy steaks topped with this rich, creamy mushroom sauce.

Morel mushrooms are wrinkled and hollow with an incredible flavour: earthy, musky and delicious, they work fantastically with meat and in creamy gravies, and are capable of elevating a traditional mushroom sauce to something quite special.

Unfortunately, it was almost impossible to find anywhere I could buy these in the UK (I naively thought they may have some in Waitrose), and a quick look on the internet sees dried morels being sold for upwards of £60! So, I decided to go with porcini mushrooms instead.

For the steak and mushroom sauce:

2 good quality steaks (I used fillet steak)
Generous handful of dried porcini mushrooms (or dried morels, if you can find/afford them!)
Single cream, around 150ml

Begin by placing the dried porcini mushrooms in a bowl, and covering with boiling water from the kettle. Leave to steep for around 20 minutes.

Meanwhile, heat a griddle pan with a splash of cooking oil until extremely hot (if you're unsure, add a tiny fleck of meat - it should sizzle up immediately). Add the steaks and cook according to instructions on the packet, and preference. It's usually around eight minutes (four on each side) for a rare steak, but this will of course vary with the thickness of the meat!

Remove from the pan and plate up - you can leave the steaks for a minute or two while you make your sauce without any ill effects to the taste.

Drain the water from the porcini mushrooms (note: if you're making a risotto or a stew, reserve the steeping liquid and add it to your dish, as it picks up a really good flavour from the mushrooms). Using the same pan as you did for the steak, add the soaked mushrooms, a knob of butter, and your cream.

Turn the heat right down, and stir until the cream sauce has picked up all the delicious meaty residue from the bottom of the pan and your mushrooms are heated through. Pour the sauce over the meat, and serve.

Alongside the steak and mushroom sauce we had brussels sprouts (steamed for around five minutes until al dente) and dauphinoise potatoes. 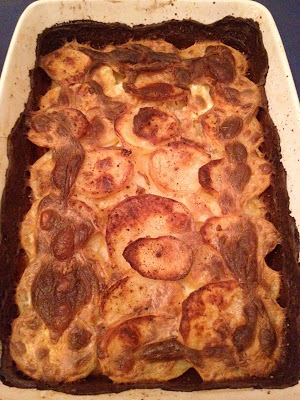 I have to admit, while not a fan of ready meals in general, I've always been happy to cheat with dauphinoise potatoes: they're a perfect side for a meat and two veg style meal (a bit more interesting than plain old spuds), but far too fiddly to make from scratch on a weeknight. So, with no prior experience of making this dish, I was a bit apprehensive at how it would turn out (and how difficult it might be!)

I made a huge portion, and still have a couple of individual servings in my freezer (to be used in the place of the ready meal variety in the future).

1kg baking potatoes
2 cloves of garlic
150ml single cream (plus extra as needed)
250ml double cream
Salt and pepper, to taste
Optional: Gruyere cheese (for a melted cheese topping), or parmesan - I chose not to use any cheese as I felt it would be overkill after my cheesy souffle starter.

Start by peeling your potatoes, and slicing them into rounds of roughly the same thickness as a £1 coin. Place your potato slices into a colander, rinse thoroughly with cold water, and pat dry on a tea towel.

In a jug, measure out your single and double cream, and add the grated garlic cloves and plenty of salt and pepper. Stir to combine.

Make sure the top layer of potatoes is fully covered in cream. This is especially important if you are not putting in the oven immediately, as raw potatoes quickly start to go grey when left in the air. Covering them with cream gives you an hour or two's grace and allows you to get on with the rest of your cooking in the meantime.

When you're ready, place you dish near the top of a pre-heated oven at 160C (140C for a fan oven) and bake for around 90 minutes (or until the potatoes are soft), checking periodically that the top is not burning. If it starts to get too brown, cover with a layer of tin foil for the remainder of the cooking period.

Stand to cool for around 10 minutes before serving (straight from the oven, this will be extremely hot). You should aim to take the dauphinoise potatoes out to cool at around the same time as you begin cooking your steak. 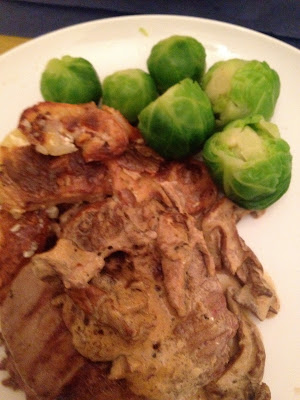 So, there you go: a fairly decent attempt at a traditional french meal. Unfortunately mushroom sauce and creamy potatoes aren't the most compelling photo subject...but I promise, it tasted a lot better than it looks!!!
Posted by Unknown at 08:12