I'd been nursing an unsatisfied craving for BBQ ever since our failed attempt to get into Pitt Cue, so when I was hosting a dinner party the other week I decided to give it an American theme. The piece de resistance was a huge roasting tin of slow-cooked BBQ beef... 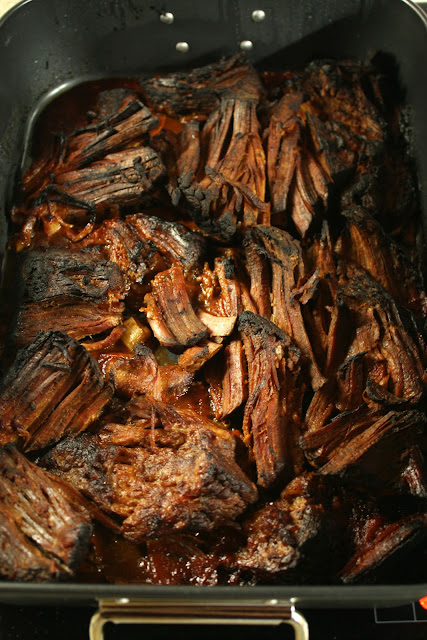 It was surprisingly easy to make, and a great excuse to play with my slow-cooker - I set it up to cook for 8 hours while I was at work, then finished the meat off in the oven before the guests arrived that night. I had planned to use brisket, but was forced to settle for topside, a much leaner cut: while I had worried it might turn out a bit dry, it was actually perfectly delicious (and probably a bit healthier too, as an added bonus!).

I found this recipe on-line and made a few tweaks to suit the size of my beef joint, the contents of my store cupboard, and my own personal preferences! See my version below:

Cut the beef into three or four big chunks (so that it will fit into the slow-cooker) and brown on all sides in a frying pan on a high heat. Add the browned meat to the slow-cooker with all the other ingredients listed above, and set to cook for 8 hours (or whatever the maximum setting is on your slow-cooker - the longer it cooks, the better).

8 hours later, remove the meat from the liquid with tongs and transfer to a large roasting tin. Strain the sauce to remove the onion pieces, and reserve. Shred the chunks of beef roughly with a fork, douse with a few ladlefuls of strained sauce, and place on the bottom shelf of a 200C oven.
Cook for an hour or so, removing every 15-20 minutes to cover with ladlefuls of sauce (to keep everything moist). With cooking, the sauce - fairly liquid initially - will thicken into a delicious glossy glaze. Towards the end of the cooking process, tear your meat into finer shreds to achieve the traditional 'pulled' texture (you will want to keep the meat in larger pieces to start with so that it doesn't dry out too much).

Serve in soft rolls, with a mound of sweet potato wedges on the side and perhaps a spoonful or two of BBQ beans. Delicious!

This recipe was a big success, and is something I will definitely be making again: while I massively over-provided food-wise (we were left with a huge bowl of BBQ beans, an untouched roast chicken, and half a tray of brownies) there was only a tiny spec of beef left...and this was quickly gobbled up by my boyfriend the next morning as part of a "cowboy" breakfast (fried eggs, toast, beans and BBQ beef).
Posted by Unknown at 03:00