Last week, a craving for red meat led my boyfriend and I to New Street Grill for an impromptu Monday night meal. Just off Devonshire Square, this stylish restaurant has a sophisticated-yet-intimate vibe; and with smartly dressed French waiters, exemplary service, and a very impressive wine list, it's a bit more special than your usual steak joint. 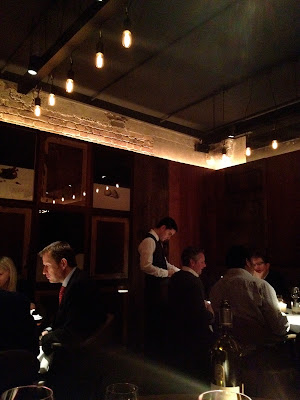 New Street Grill boasts a very appetising menu, featuring everything from game to seafood, but we were here for steak, so we ignored fought off temptation (roast venison, confit duck leg, lobster macaroni...) and turned our attention to the list of cuts. 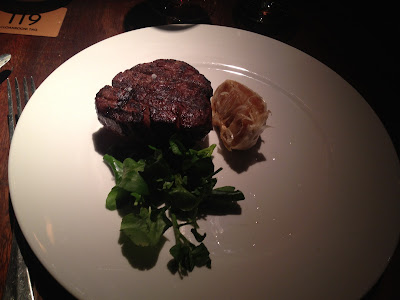 I opted for the 250g fillet steak (£33), and received a thick slab of beautifully seared meat. The inside was perfectly rare, while the exterior sported a deep brown gloss with a buttery, almost caramel flavour. Paired with a side of roasted beetroots, carrots and celeriac and a copper dish of creamy peppercorn sauce, it was just what I had been craving. 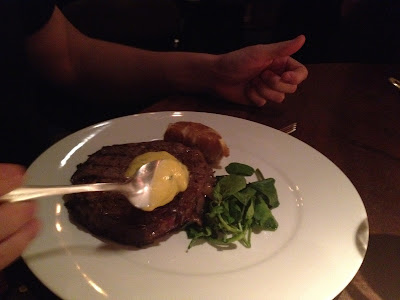 My boyfriend went for the 350g rib eye (£32). A slightly fattier cut than my fillet, this was incredibly tender, but without (I thought) quite the same intensity of flavour. His accompanying bearnaise sauce was somewhat inferior to my peppercorn (but then, I'm not a fan of tarragon, so I may be biased), but his side of macaroni cheese (complete with smooth cream sauce and a crisp, golden parmesan topping) more than made up for it. 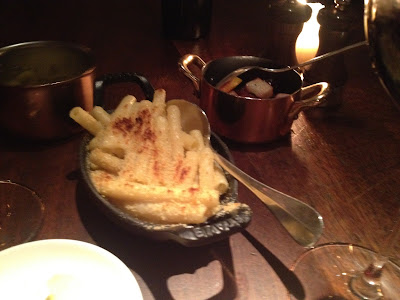 Both steaks were served with a bundle of watercress and half a head of roasted garlic - I ate a clove or two (sweet from the slow cooking process, but still quite potent) which made a lasting impression on my breath!

Paired with a bottle of red (a French Cabernet Sauvignon, for a very reasonable £20 - although the wine list does tend towards the pricier end of things, with many stretching into the £1000s), this meal was a real treat, and if you're a meat-lover, I highly recommend giving it a try!