Fish pie is my boyfriend's favourite meal, but for some reason my previous attempts have never been as successful as I could have hoped: too dry, too saucy...the issues have varied, but most recently I have had a losing streak of soggy mashed potatoes. 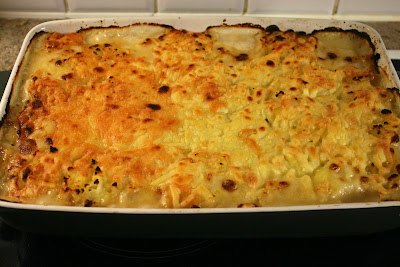 This time, I decided to up my game and - in an attempt to make the ultimate fish pie - combined two popular recipes (J Sheeky's version and the "Luxury Fish Pie" recipe from the BBC website) with a few extra additions of my own. 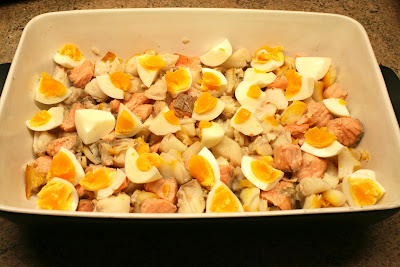 The result? A delicious blend of smoked haddock, salmon, white fish and king prawns - not forgetting the all-important hard-boiled eggs - in a creamy, flavourful white sauce, topped with smooth mashed potato and a bubbling layer of melted cheese. Success at last!

For the topping
1kg floury potatoes
A knob of butter
A dash of milk
Salt (to taste)
150g of cheddar cheese, grated 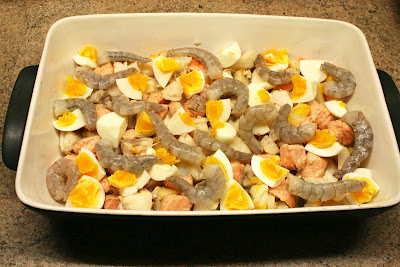 First, prepare your potatoes. I like to do this stage in advance, and leave the mash to cool before I use it, as it makes it easier to work with when I'm layering everything into the pie dish.

Prick your baking potatoes all over with a fork and bake in a 200C oven for around 1 hour and 15 minutes. Remove from the oven, slice in two, and scoop the fluffy insides into a large mixing bowl. Retain the 'jackets' and use to make filled potato skins (with bacon and cheese - delicious).

Mash the potato with a knob of butter and a dash of milk, and season with salt. Warning: don't add too much milk or your mash will get too runny when you cook your pie!

Prepare your fish by cutting the fillets into fairly large (around 1-inch square) chunks. Heat the fish stock and white wine to a simmer in a large saucepan and poach the fish for two minutes. Drain the fish over a bowl, reserving the poaching liquid for the white sauce.

Meanwhile, boil the eggs for around 10 minutes. When they're done, run them under cold water, peel, and cut into eighths. Layer everything into a large dish and top with the prawns.

To make your white sauce, melt 50g of butter in a heavy based saucepan over a medium heat, and stir in the flour to make a roux. Add the milk and poaching liquid (i.e. fish stock and white wine) a bit at a time, stirring continuously until the sauce thickens.

Remove the pan from the heat, and add the mustard, double cream, and squeeze of lemon juice. Season generously with salt and freshly ground black pepper, and pour into the pie dish over your fish and hard-boiled egg layer.

You're now ready to add the mashed potato layer. I find it easiest to mould handfuls of cold mashed potato into flat 'tiles' and place on top of the pie filling. This helps ensure a smooth and even coverage.

Sprinkle generously with cheese and place in a pre-heated oven at 200C for around 40 minutes or until the filling is piping hot and the cheese is golden and bubbly.