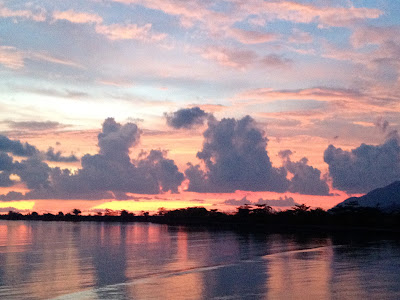 I did mean to get all my Malaysia posts up in the week I got back, but time seems to move at a different pace in London, and the last 12 days have flown by in a whirlwind of work deadlines and Christmas parties...My tan is fading fast, I've caught a cold, and my holiday feels like a distant memory - so it's probably a good time to cheer myself up with some reminiscing! 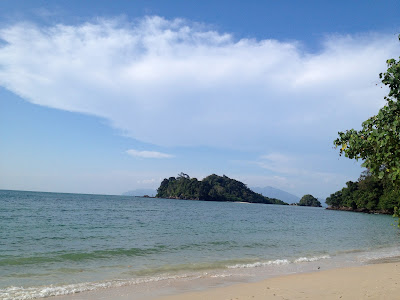 I don't want to bore you with a million detailed posts of all the delicious things we ate on holiday...but here is a quick look at some of my favourites. 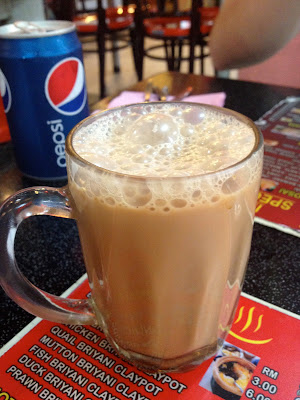 We celebrated Diwali (or Deepvali as they call it over in Malaysia) with a gorgeous chai tea (and a slap-up tandoori meal) at Restoran Kapitan in Georgetown, Penang. 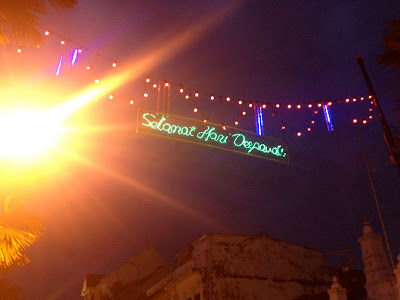 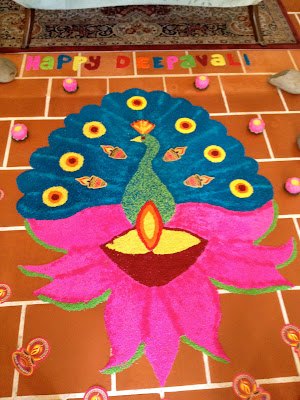 A beautiful Deepvali decoration made up of thousands of tiny beads... 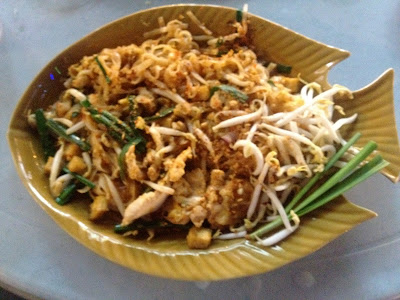 Georgetown is famous for its food: apparently it is not uncommon for KL residents to make the 4 hour trip just for a meal in one of the famous hawker markets...We ate at the Red Garden market in the centre of town, where there was an incredible array of stalls serving everything from traditional Malay to Chinese, Indian, Japanese, Phillipino, Thai and Indonesian dishes. I went for a tasty pad thai (see above), while my boyfriend had some less photogenic (but no less delicious) crispy roast duck. 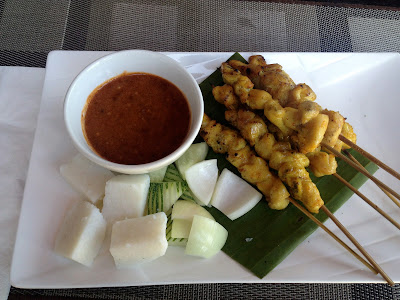 On arrival at our hotel in Langkawi, we had the best chicken satay of our trip. Basted in a delicious, subtly sweet marinade, and accompanied with a gorgeous peanut dipping sauce, this was perfect alongside a heaped plate of nasi goreng (Indonesian egg-fried rice). 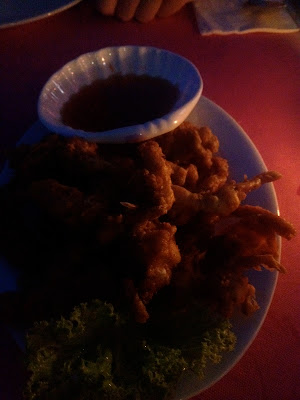 While in Langkawi, we also tried deep fried soft-shelled crabs. These tasty golden morsels - which you eat whole, shell and all - were fantastic: tender and sweet, with just the right amout of crunch. Delicious. 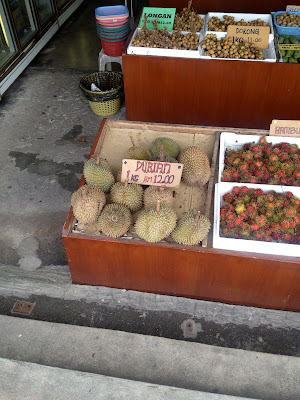 While we didn't actually try a durian, we definitely smelled them! This pungent fruit seemed to be in season during our visit and we were able to sniff out the roadside stalls even through the closed windows of our bus! 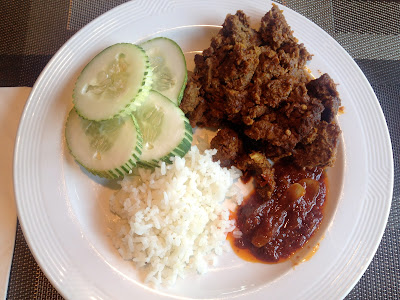 With such a multi-cultural cuisine, it's easy to lose yourself in Chinese, Indian, and other pan-Asian fare...but the local Malay food is just as good. One of my favourite Malaysian dishes was beef rendang curry. I've eaten this before at the Banana Tree in Angel, but the real deal was even better.

Rendang is far dryer than the curries you usually get here in the UK: packed with strands of slow-cooked beef and crumbly grated coconut, it has a fantastic texture, and a lovely flavour from the combination of tasty spices (ginger, lemongrass, tumeric, tamarind, cinnamon, cardamon....). They served it in the breakfast buffet at our hotel in Langkawi, and I piled my plate high each morning for a hearty (if somewhat unusual) brunch. 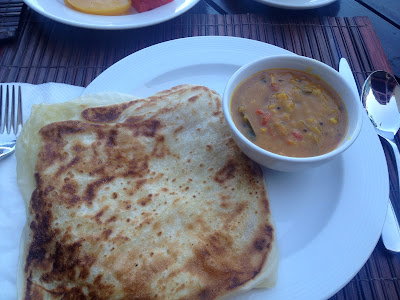 Another speciality was roti canai. Differing slightly from the Indian dish of the same name, Malaysian roti is a square flat bread composed of thin layers of buttery dough and fried on a hot plate. Fresh from the griddle, this was ridiculously good: perfect paired with daal, or with a couple of sunny-side-up fried eggs at breakfast (for yolk-dipping - YUM). 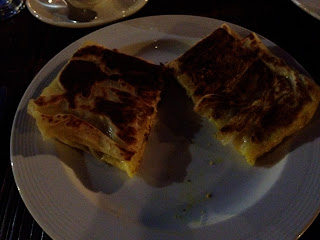 Possibly even more delicious (and unhealthy!) than the roti canai was murtabak, a dish consisting of roti stuffed with a mixture of minced meat, vegetables, ginger and egg before being fried on the griddle. We tried the chicken and beef versions on our trip, and both were excellent. I've never come across these in the UK, which is probably a good thing (for my waistline at least...) 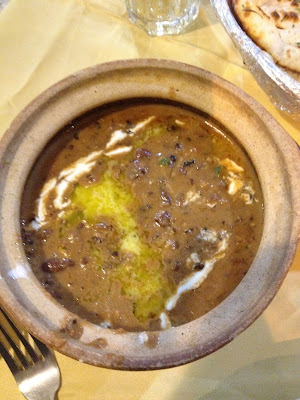 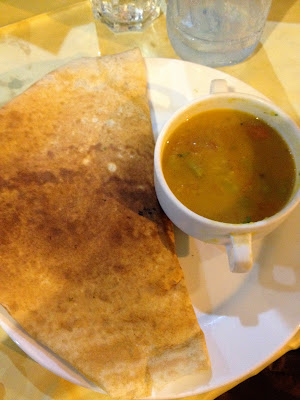 We also ate some great South Indian food in Langkawi, including the fantastically crisp dosa (thin rice-flour pancakes) and dal makhani in the photos above. Dal makhani - a creamy, buttery, red kidney bean stew - was one of my favourite dishes when I was travelling in India a couple of years ago. I've always been disappointed with the ones I've tried in the UK, so it felt amazing to finally satisfy my cravings with a really good version! 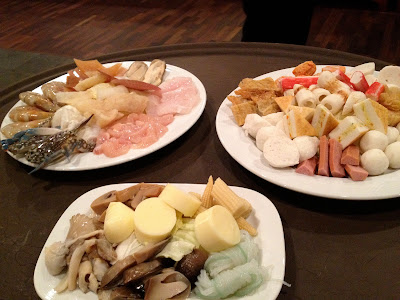 On our way back down to KL we spent a couple of days in the Cameron Highlands, where many of Chinese restaurants were serving something called a 'steamboat'. Intrigued, we gave it a go...

It turned out to be fairly similar to the Japanese sukiyaki we tried earlier in our trip: we were served with huge platters of seafood and dumplings and told to help ourselves from a buffet of noodles and vegetables, before cooking everything ourselves in a hotpot filled with two types of broth (spicy tom yam soup and a milder vegetable broth). 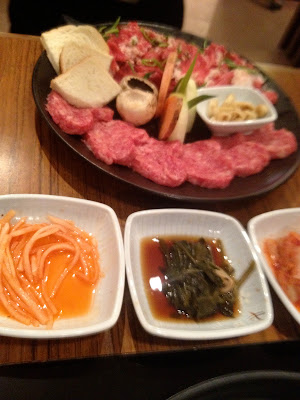 On our final night in KL my boyfriend wanted to go for Korean BBQ, so we headed to Bulgogi Brothers in Pavilion Mall. I've never really been a fan of Korean food (everything is so vinegary!) but as with everything else we ate in Malaysia, it was pretty good.

Strips of marinated beef and little spiced burger patties - cooked by a chef on a hotplate at our table - were paired with an abundant selection of side dishes. Some were rather too pickle-y for my liking (such as the ubiquitous kimchi) but I enjoyed the lotus roots and sweet potato mash. We also ordered an interesting egg-fried rice dish called bibimbap. A portion of rice, topped with vegetables and a spicy sauce, arrives in a searing hot bowl. Raw egg and meat is added to the dish, everything is mixed together, and the heat from the bowl cooks it all through: Yet another example of the table-side cooking which seems to be so common in Asian cuisine.
And with that final bit of food-tourism, our trip was over and we headed back to chilly England...
Posted by Unknown at 06:44