I've eaten a lot of good seafood since moving to London - most recently at the Morito Seafood Festival - but my two most memorable seafood meals both took place on a trip to Vietnam a couple of years ago.

The first was in Mui Ne, a pretty coastal town half way between Ho Chi Minh City and Nha Trang. If you walk along the bay - past the endless stretch of hotels that line the shore - you come to a little fisherman's village, where you can find some of the best food in town at obscenely low prices.

Freshly caught seafood sizzles on make-shift barbecues, filling the air with the mouth-watering scent of charred fish, while locals dish up steaming platters of seafood noodles and chunky fish stews. The calamari I ate there - piping hot morsels of golden-fried squid that literally melted in my mouth - was one of the highlights of my trip, and none I've eaten since has ever lived up to to their memory.

Seating comes in the form of child-size red plastic tables and chairs (actually identical to the ones I played at as a child), and while this can pose a bit of challenge for the taller diner - it was hilarious watching my 6 foot 3 boyfriend squeezing in, knees almost touching his chin - I think it adds to the overall experience...!

The other meal was in Halong Bay (of Top Gear Special fame), on one of the many floating restaurants that line the shore. I'm pretty sure it gave us food poisoning - or at least made the food poisoning we already had worse - but it was definitely worth it*. A huge, sizzling fish, freshly caught - skin golden and crisp; flesh soft, white and flaking - was fried up with an incredible medley of lemongrass, ginger, chillies and garlic; intense, fragrant flavours which had us picking the bones and scraping the plate clean.

Recently, I decided to attempt to recreate this (hopefully sans food poisoning) at home... 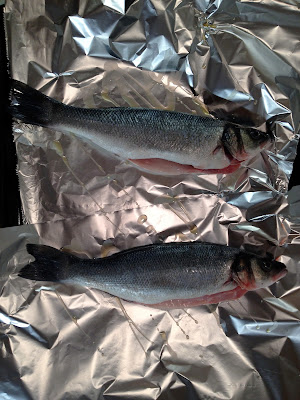 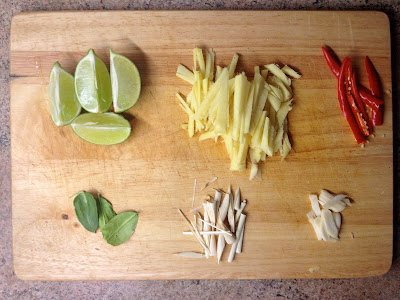 Tear off a large piece of silver foil and spread it onto a metal roasting tray. Grease the foil with the toasted sesame oil and place the two fish fillets onto the centre of the tray. 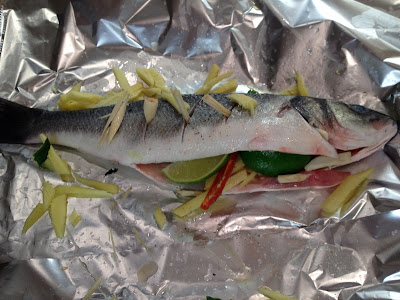 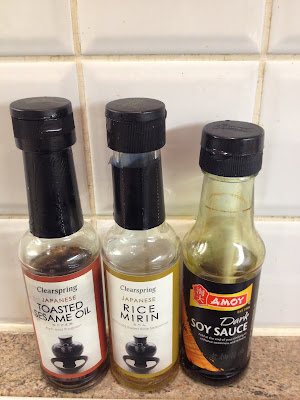 Douse the fish with mirin and soy sauce for extra flavour, and place into a pre-heated oven at 200C for about 30 minutes. Top with chopped coriander and serve piping hot. 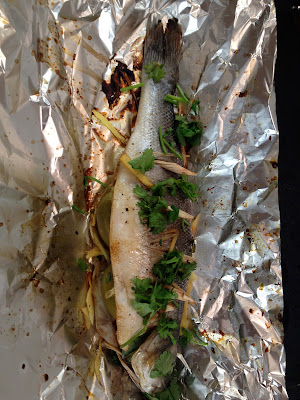 While this meal was pretty good, it didn't even come close to the original. My decision to bake rather than fry the fish - motivated by a desire to minimise washing up and general stinkiness - could be to blame, as could the scarcity of 'fresh-from-the-sea' fish in central London. Or maybe things just taste better when you're floating in the turquoise waters of a tropical bay. Next time I make this I'll try frying it over a high heat and see if that helps!

*When you've had food poisoning on and off for four or five weeks, it becomes a bit of a non-event!
Posted by Unknown at 05:06