This is a bit of a delayed post, but given the nature of the dish, I thought it would be more appropriate for autumn than midsummer (although - perversely - now we've hit September, the weather is the best it's been for months!)

After using most of the home-grown vegetables donated to me by my parents in my feast of summer salads, I was left with an enormous cabbage, and, somewhat unimaginatively, decided to make cabbage soup.

Now before you stop reading, I know cabbage soup has a bad name, conjuring up images of miserable fad-dieters subsisting on overcooked leaves in a watery broth...but this wasn't that kind of cabbage soup.

The addition of lentils, butter beans, carrots, onions, mushrooms, and plenty of bacon meant that this was more of a stew than a soup (and while healthy, far from rabbit food). 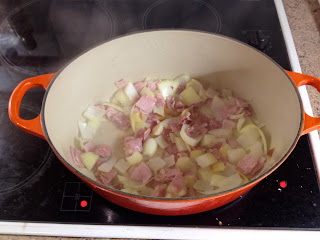 First, fry the bacon for a couple of minutes before adding the chopped onions and the diced carrots. 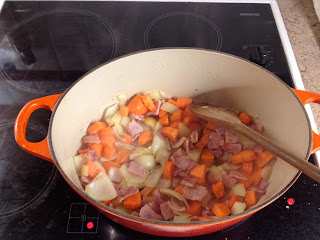 Sweat the onions and carrots for a few minutes, then add the sliced mushrooms, butter beans, lentils, and green cabbage. Cover with boiling water and season to taste. 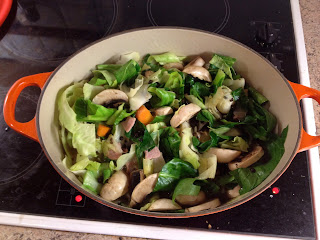 Put the lid on your pot and leave to cook for 20 minutes or so, until the cabbage leaves have wilted and the liquid has soaked up the flavours of the bacon and onion. 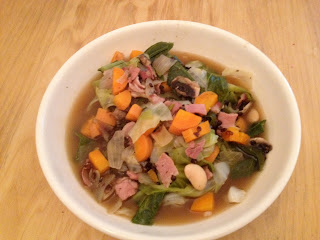