Two sunny days in Richmond and a lunch at Med Kitchen

One Saturday early this summer I met up with my stepfather in Wimbledon for a 25-mile cycle ride (in preparation for a 50-miler we were signed up for a few weeks later - thankfully we survived!). We had planned out a scenic route - encompassing Wimbledon Common, Richmond Park, and Hampton Court (and of course a pub break half way) and, despite a gloomy forecast (rain, rain and more rain), the day "dawned bright and clear" - sunny and warm, with a fresh breeze perfect for sweaty cyclists(!) 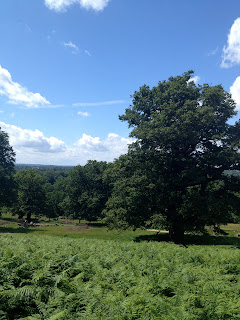 Richmond Park was breathtakingly beautiful: months of rain had left the park impossibly green, with waist-high ferns, swathes of long grass rippling like waves, huge, ancient oak trees, and stunning views over the south of London. And of course, the beautiful red deer the park is famous for: the highlight of the day was when three exquisite does bounded - one behind the other, in perfect formation - right across our path (no photo, unfortunately!) 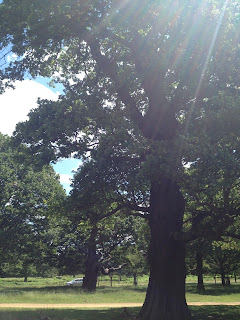 Following the riverside path from Richmond to Hampton Court feels like you're living a piece of history: quintessentially English, from the royal swans on the  water to the oak trees shading the path, this must be one of the most un-changed parts of London. 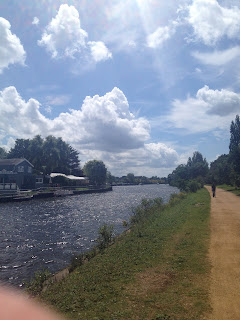 A gentle cycle along the water took us to Hampton Court, an imposing sight with its red brick and Tudor chimneys. 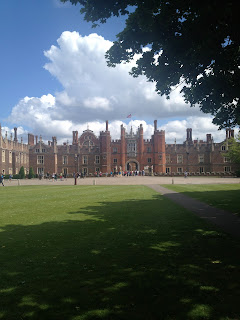 And of course we stopped mid-way for a pub lunch. Sandwiches - BLT and thick cut ham and mustard - eaten outside in the sunshine alongside a well-deserved drink. Perfect. 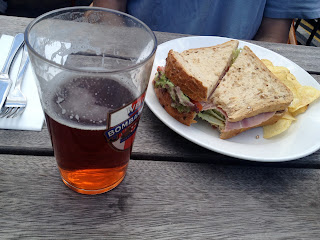 Having had such a lovely trip the first time round, I was determined to take my boyfriend to Richmond Park at some point in the summer. After waiting a good few weeks for another sunny weekend, I finally got my chance. 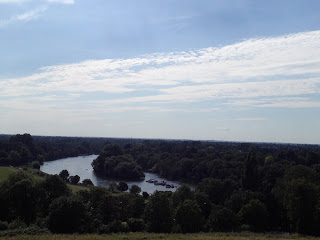 On foot this time, we had planned to explore the town centre. However, while seemingly quite picturesque, it was incredibly busy (we clearly weren't the only ones who had decided to get out of the city on this baking hot day), so we escaped the crowds to walk along the river instead. 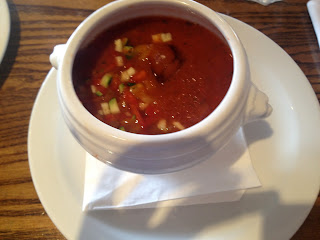 We stopped for lunch at Med Kitchen. Sitting right on the river, with tables outside and an airy high-ceilinged interior, this was one of the nicest branches I've been to. I was too hot to even contemplate a cooked meal, but a refreshing bowl of cool gazpacho - complete with ice-cubes - and a summer salad of asparagus, green beans, cherry tomatoes and cos lettuce went down a treat. My boyfriend opted for the fish of the day, which happened to be fish and chips. In a light batter, with a tasty serving of mushy peas and tartar sauce, this was also pretty good. 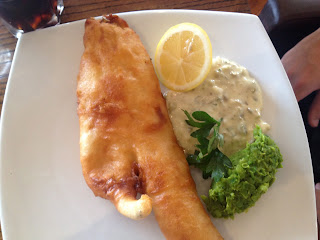 After lunch, we walked through various meadows (to our city-dwelling eyes these seemed to stretch never-ending in all directions) until we arrived at Richmond Park. A swelteringly hot day, the acres of damp grass drying out in the sun produced an almost palpable wall of humidity... 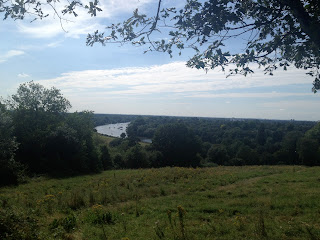 We perservered for about 45 minutes in the hope of seeing a deer, but they must have all been relaxing in the shade somewhere (clever deer), as we didn't even spot one. While still a lovely spot for a walk, Richmond Park is definitely easier to explore on bike: attempting to cross it on foot, it quickly becomes obvious how big it is and it's impossible to cover even a fraction of the total area.