I pass The Modern Pantry every morning on my way to work, peering enviously at the people enjoying leisurely breakfasts in the Scandi-chic interior or - on sunny days - sipping their coffees in the outdoor seating area; newspapers open, dogs lounging at their feet. So, when I had a day off recently, I knew exactly where I wanted to go... 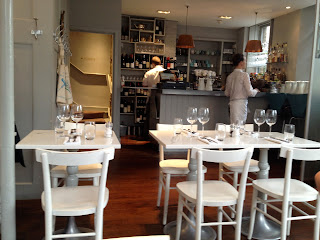 The Modern Pantry has a fantastic breakfast menu, boasting of a number of really innovative dishes - from a sweetcorn, feta and polenta waffle, spiced with green chilli and coriander and served with bacon and maple syrup, to a sugar cured prawn omelette with smoked chilli sambal - alongside some more classic options. 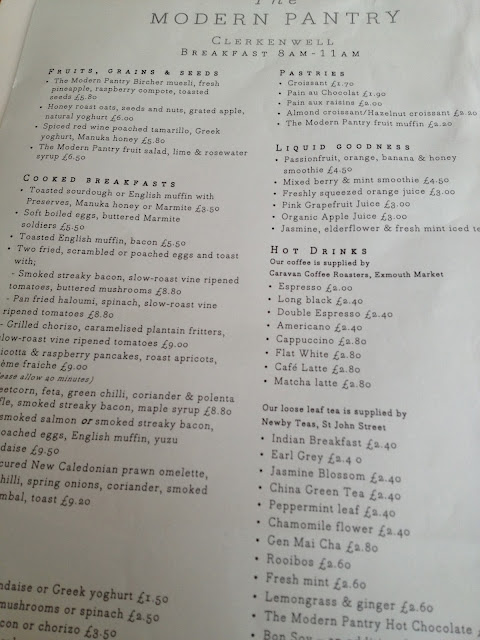 I've actually been for weekend brunches a few times before: the eggs benedict with yuzu hollandaise is a winner - beautifully crispy strips of bacon and perfectly poached eggs balanced atop doughy English muffins, smothered in a rich-yet-citrusy hollandaise sauce; the use of yuzu (an Asian citrus fruit) marking an interesting departure from the norm. And in less hungry times I've opted for a simple but delicious breakfast of toasted sourdough bread with preserves, or shared a gorgeously flakey almond croissant with a friend over a cup of fantastic coffee. 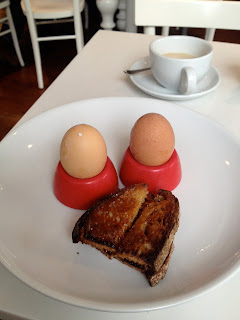 This time - while sorely tempted by the idea of ricotta and raspberry pancakes (with roast apricots and creme fraiche mmm) - I decided to try out the intriguing riff on runny egg and soldiers, which Modern Pantry has sexed up with the addition of marmite. 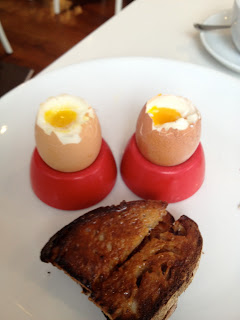 WOW. I wasn't sure if this would work, but it was incredible. Butter and marmite, melding together, had soaked into the toasted strips of sourdough bread; the tangy saltiness of the marmite partnering exquisitely with the oozing golden yolk at every dip...This is a flavour combination I will definitely be re-creating at home. 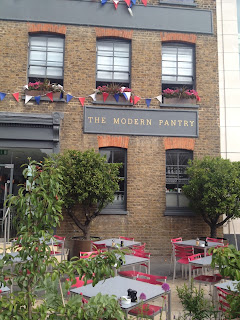 I've also stopped at Modern Pantry a couple of times for drinks. Once on a beautiful summer's day, when my cousin and I sat outside in the pretty patio area sharing a bottle of crisp white wine. Despite its proximity to Clerkenwell Road, the outdoor seating area - sitting in the cobbled environs of St John's Square - has a mellow vibe; and with a fortuitously south-facing position, it's a perfect spot for soaking up the sun. 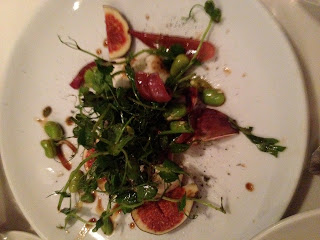 And then again, last week: inside this time (damn you autumn), and - more sensibly - combined with some food. The dinner menu at The Modern Pantry is even more exotic than the breakfast one, bursting with unusual ingredients and innovative flavour combinations. It was hard to decide what to order in the face of so many exciting dishes, but after much deliberation we decided to share the grilled aubergine in the sesame, ginger and soy dressing and the black fig and mozarella salad with pomegranate roast red onion, broad beans and endive, followed by the cheese platter. 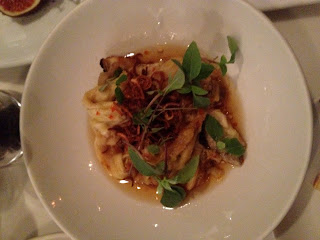 The aubergine dish was good, with a pleasant nuttiness from the sesame dressing and a distinctly Asian flavour, but it was the fig and mozarella salad that really stole the show: the combination of the tangy buffalo mozarella with the pomegranate molasses-roasted onion was beautiful - something else I'll definitely be recreating in my own kitchen. 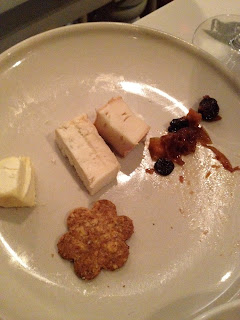 The cheese board, already semi-devoured!

The cheese board boasted a good selection of cheeses, served alongside tasty flower-shaped crackers and a delicious chutney replete with caramelised onions and plump raisins: an excellent accompaniment to the carafe of red wine we were sharing.

I'm sure I'll return to The Modern Pantry soon - there's so many dishes I still haven't tried, and for a relaxed weekend brunch (or a weekday breakfast if you're lucky), it really is hard to beat.