Teppanyaki is a form of Japanese cuisine in which food is cooked on flat iron griddles while diners look on. In the West, it has evolved into something of a performance art, with spatula-juggling, food-flinging, flame-throwing chefs keeping guests entertained as they eat. 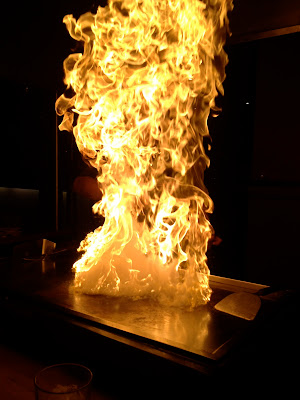 I first visited Sen Nin with my boyfriend earlier this year, a slightly awkward experience as we were the only two people eating from the grill menu - while it was nice to have our own personal chef, it did feel a little intense! However, the food was great, and I knew it would be a great place to come in a large group, or for a family meal. In fact, I can't think of a better way to introduce kids (or fussy eaters) to Japanese food.

Knowing my two youngest brothers would enjoy the interactive element, we returned to Sen Nin a few weeks ago for another go at the teppanyaki grill. 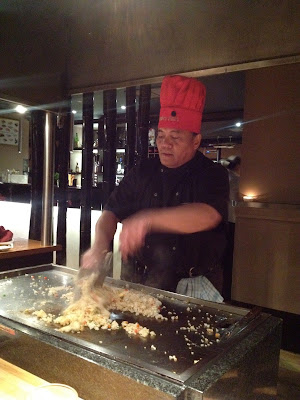 Teppanyaki is a truly involving dining experience, with at least as much emphasis placed on the cooking as on the consumption of the meal. At Sen Nin a crew of friendly (and slightly maniacal!) chefs juggle cooking implements and eggs, laughing all the while, before flinging bits of omelette left right and centre for diners to catch in their open mouths (often unsuccessfully - on our most recent visit the poor woman next to us ended up with at least three chunks of omelette in her cleavage!)

On this occasion we ordered two Fuji Teppanyaki meals and two Samurai Teppanyaki meals. Both menus begin with a warming bowl of miso soup, before moving on to bowls of freshly prepared egg fried rice (bursting with tasty morsels of brighly coloured vegetables), a choice of two meaty mains from a list of four (chicken, tiger prawns, tilapia or calamari for the £18.95 Fuji meal; steak, chicken, salmon or lamb for the £24.95 Samurai meal), and a side of stir-fried vegetables. We opted for king prawn and chicken and steak and chicken respectively, all of which were delicious. Tender chunks of chicken breast were fried with leeks and drenched in sweet, glossy teriyaki sauce, while the king prawns (plump and juicy) were redolent with garlic and melted butter. The steak, served in succulent chunks with slivers of tasty mushroom, was also excellent. Luckily (with two teenage boys in our party), portions are very generous, and my hungry dining companions all seemed to be well satisfied by their meal! 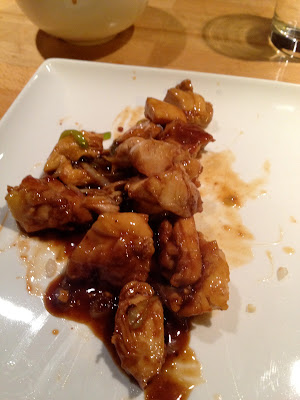 
We also ordered prawn and vegetable tempura and chicken yakitori skewers to share as additional starters. Arriving after our miso soup, these were all very tasty, although the enormous pieces of vegetable tempura were somewhat difficult to navigate with chopsticks - watching my youngest brother attempting to eat a chunk of aubergine the size of a small cod fillet was almost as entertaining as the antics of our chef!

All in all, this was a fun (and tasty) meal - definitely something I'd recommend for families or those in search of a livelier dining experience.