After making our way up the West coast of peninsular Malaysia to Langkawi, and back down the centre via the Cameron Highlands, we ended our holiday with one final day in KL.

I am a huge fan of dim sum (I once consumed 18 prawn dumplings in one sitting...), and while you can get some great dim sum in London - Yautcha is my favourite - I was keen to try out the 'real deal' with a traditional Asian dim sum brunch before we left. With this goal in mind, we returned to Pavilion Mall (home of Suki-Ya) to Din Tai Fung, a chain well known for its dim sum offering. 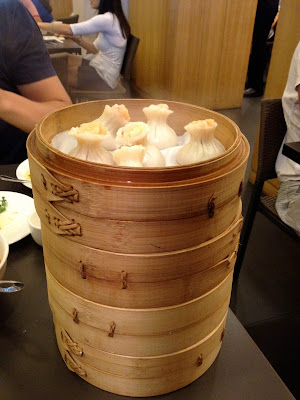 A tower of dim sum deliciousness...

After perusing the menu, we ordered four types of dim sum: pork and prawn shao mai, crab xiao long bao, pork and prawn dumplings, and pork buns; alongside a couple of other dishes - braised beef soup for me, and pork chop fried rice for my boyfriend - and a big pot of jasmine tea. 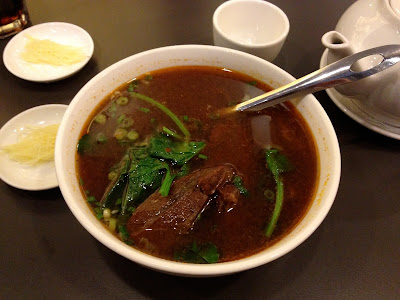 My soup was excellent: delicious chunks of tender, slow-cooked beef floating in an intensely meaty savoury broth, with some wilted greens thrown in for good measure. The portion was a lot bigger than I expected - see the tea cup next to the bowl for a sense of scale! - and combined with the huge pot of jasmine tea, I was pretty full of liquid by the end of the meal (as attested by my 'sloshing' stomach). Totally worth it though! 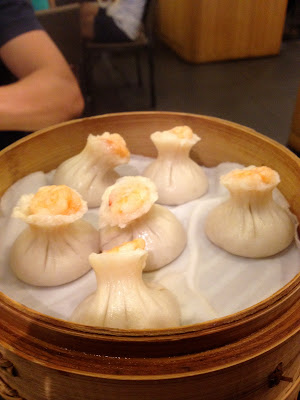 The dim sum arrived as they were ready (which was somewhat faster than we could eat them), and we soon had a towering stack of bamboo baskets on our table.

My favourite were the pork and prawn shai mai. These little pockets were filled with a gingery meat filling and fragrant juices (which spurted out messily - but tastily - with every bite), and topped with a delicately balanced prawn. 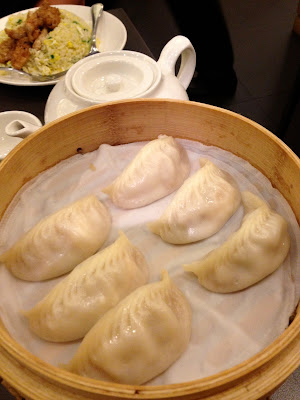 The pork and prawn dumplings were also a lot 'juicier' than any I've had before (causing my boyfriend some concern that he may have squirted the couple at the table next to us!), but were delicious all the same. 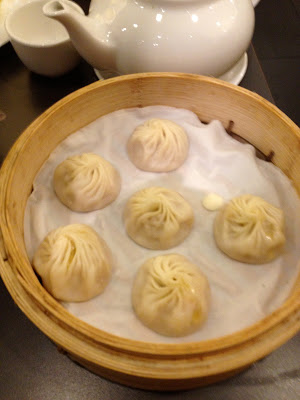 The crab xiao long bao were a bit less hazardous - smaller than the other dumplings, they could be consumed in one tasty mouthful - and had a pleasantly delicate crab flavour.

I only managed a tiny taste of pork bun, but was very impressed. The last time I tried pork bun was at a service station in Vietnam - a horrible concoction of grisly unidentified meat in a powdery bun. These were completely different: delicious, richly flavoured pork filling encased in incredibly light pillows of dough. 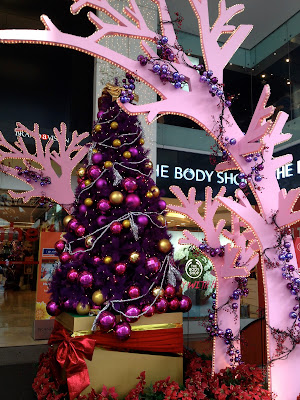 After brunch we went for a walk round the centre of KL. In our two-week absence from the city Christmas decorations had appeared everywhere, and it felt very strange walking around amongst all the Christmas trees in 30C heat and brilliant sunshine. It definitely put me in a festive mood though, and the thought of heading back to chilly London became a bit less depressing when tempered with thoughts of party season! 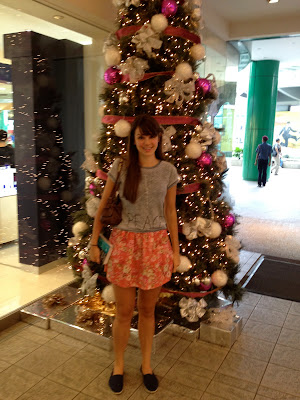 Christmas AND summer clothes - crazy times
Posted by Unknown at 02:35