The inspiration for this dish came from an old cookbook I stole from my Mum, "Take Three Cooks" by Nanette Newman, Emma Forbes and Sarah Standing. The original recipe is for a marmalade bread pudding, but they suggest the use of cheese for a savoury variation. Since my boyfriend is a huge fan of French toast, I thought I'd give it a go.

It's pretty easy to make, and would definitely pose a good alternative to traditional eggy bread if you were serving brunch to a crowd. The glorious combination of bubbling golden cheese and rich custard-soaked bread is incredibly good - comfort food at its best. 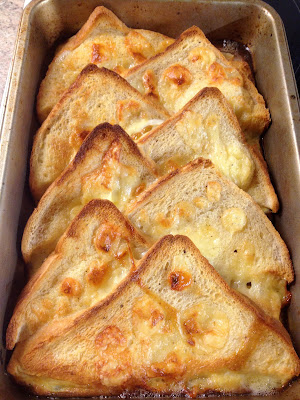 The recipe doesn't call for any fancy ingredients - simply sliced bread, eggs, milk, cheese and butter. If you want to snazz it up, you could add some slices of ham between the slices of bread or spread one side of the bread triangles with mustard to give it an extra kick.

Ingredients (serves 2 - or one hungry boy. Double the recipe to feed a larger group)

Butter each slice of bread (on both sides if you're feeling especially decadent - I was lazy and just did one) and cut into triangles (two or four, again depending on how lazy you want to be when it comes to stacking them!). Layer the bread into the base of a greased ovenproof dish, topping each slice with cheese. 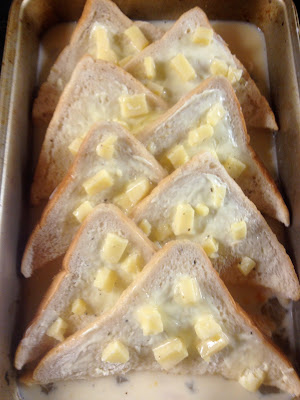 Before (not so pretty!)


Heat the milk in a pan until hot but not quite boiling. Pour the milk over your eggs, whisking as you pour. Season with salt and pepper, then pour the custard mixture over your bread and leave to soak for 10-15 minutes (or - more laziness - miss this step!).

Bake in a pre-heated oven at 200C for around 25 minutes (increase this to 30-40 if you have doubled the recipe) until your cheese is golden and bubbly and the custard is set. Serve piping hot.