Visiting my parents for dinner on the weekend, I came into possession of a large quantity of home-grown veg: an enormous cabbage, a big bundle of ruby chard (like Swiss chard but with pinky-red stems), a bunch of incredibly peppery rocket, and three types of beans (broad beans, runner beans, and some unusual black-podded beans which I have never come across before). 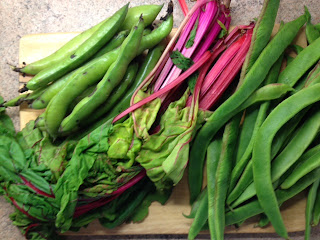 Given all the not-so-healthy 'research' eating I've been doing for this blog, I thought this would be a perfect opportunity to experiment with some healthy salad recipes:

Large bundle of ruby chard (can be substituted with Swiss or rainbow chard)
Chopped beetroot, pre-cooked (sold in packs of four - I used three in this salad)
Most of a pack of feta cheese (around 150g), crumbled
1/3 sachet of ready-to-eat beluga lentils
Black pepper

Rinse the swiss chard and pat dry. Roughly chop, retaining the red stems. Steam the swiss chard for approximately 4 minutes (or boil for 2-3 minutes if you don't have a steamer). The stems may take slightly longer to cook than the leaves, so pop them back in for a minute or so if you feel that they are not 'done'.

Leave the swiss chard to cool, then layer into a large dish. Top with chopped beetroot, crumbled feta, and a generous sprinkling of beluga lentils. I cheated and bought a sachet of pre-cooked lentils, but feel free to cook from scratch if you are more the domestic goddess (or god!) type...Season and serve (the feta is fairly salty, so I only used black pepper) 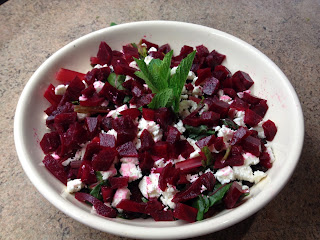 Wash and pat dry the rocket leaves (if they're from the garden, that is - skip this step for the normal 'packet' variety). Halve the baby plum tomatoes, tear up a handful of basil leaves, and toss with the rocket leaves in a salad bowl. Chop the buffalo mozarella balls and gently fold into the salad, retaining some to layer on top.
Season and drizzle with the vinagrette to serve (or, for a simpler alternative, sprinkle with some good quality olive oil and a big pinch of rock salt).

Yoghurt and mint dressing:
200g pot of yoghurt (not low-fat)
2 cloves of garlic, crushed or finely chopped
Juice of half a lemon
Handful of fresh mint leaves, roughly chopped
Plenty of salt and pepper

Shell the broad beans and 'de-string' the runner beans (that is, pull the fibrous part from the edge of the pod). Cut the runner beans into pieces, roughly an inch in length. Add to a pan of boiling, salted water, and leave to cook for around 5 minutes. Drain, add to a large bowl, and leave to cool, before sprinkling with grated parmesan cheese. In the meantime, make the yoghurt and mint sauce.

Put the yoghurt into a small bowl. Add the crushed garlic, the juice of half a lemon, a decent amount of salt and black pepper, and stir. Chop the mint leaves and fold into the yoghurt mixture, retaining a whole sprig of mint for decoration. Serve alongside the bean salad. 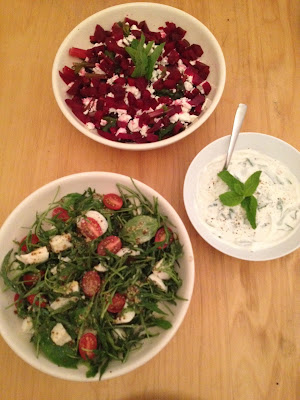 The salads - which I served to my dad, brother and boyfriend, alongside a plate of toasted pitta breads - went down pretty well, depsite some initial complaints about the lack of meat. They could also work well as a starter or side dish: the swiss chard salad would have gone well with grilled salmon fillets, while the rocket salad would have made a good accompaniment to a juicy steak.
Posted by Unknown at 07:32