Situated on trendy Hoxton Square, Red Dog Saloon specialises in US cuisine, with BBQ meat, burgers and wings featuring prominently on its menu. In keeping with the American theme, they also offer customers the chance to compete in one of their Man versus Food style eating challenges: "The Hot Wings Challenge" or "The Devastator Challenge". Basically, if you manage to consume either six super spicy hot wings or an enormous Devastator burger, fries and extra-thick milkshake in under 10 minutes, you earn a place on their wall of fame, and a free t-shirt (but apparently you still have to pay for the meal, which seems somehow disappointing). 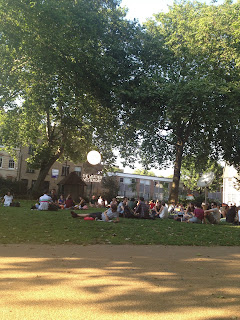 The light installation says "The weather yesterday". Who knows why...

I came here with my dad, boyfriend, and two of my brothers, and after a brief but somewhat awkward period of lounging in the sun on the grassy lawn at the centre of Hoxton Square (awkward because we were, for the main part, suited up, unlike to oh-so-hip(ster) crowd who surrounded us - let's just say that faux geek glasses and ironic moustaches abounded), we went in to our table. 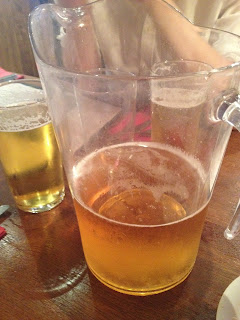 I came here on the recommendation of a friend who had praised the milkshake, which is apparently so rich and thick as to be almost impossible to finish. Unfortunately I was let down by the boys, who decided to order a big jug of beer instead - I was dubious as to my ability to consume both a shake and a full meal, so I chickened out of getting one myself. As a more manageable accompaniment to my food, I went for the coke float, which I really enjoyed: it was one of the better ones I've had in London (far, far better than Byron Burger for example), with plenty of rich creamy ice-cream foaming up in the ice-cold soda. 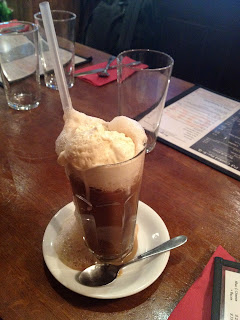 Food-wise, three of us opted for the BBQ Rib Dinner, which consisted of a half rack of St Louis cut pork ribs with one side each. Between us we ordered: bacon mac & cheese (very average I thought - soggy pasta in a gloopy sauce - but then again, I tend to dislike mac & cheese in general, and my boyfriend said it was fine); collard greens (also fine - I mean collard greens are never that amazing, I only ordered them to counteract some of the grease with a few vitamins!); French fries (very good - piping hot with a good texture, neither too crispy nor too soggy - I stole quite a few!); and an extra side to share, of BBQ beans (my favourite side, this was fantastic - a big helping of tasty beans topped with a generous portion of pulled pork). 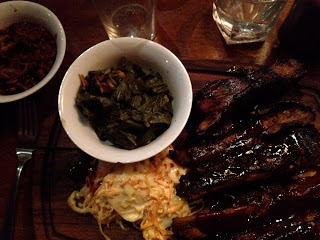 Half rack of ribs, collard greens, and coleslaw

The ribs themselves were a bit hit and miss. The sauce was lovely; dark and sticky, it coated the meat in a thick glossy layer and had a pleasantly sweet smoky flavour. However, while some ribs were tasty (I was lucky in that 5 of my 6 were good) some were incredibly bad, with big sloppy hunks of slobbery white fat where the meat should have been. Over half of my boyfriends ribs were like this, which kind of ruined his meal. Fatty ribs with soggy mac & cheese...not ideal!

My dad ordered a Philly cheesesteak, which didn't arrive with the other food and only appeared after some chasing. I didn't taste it myself, but it launched my brother into a story about going all the way to Philadelphia to get a real philly cheesesteak while travelling in the US on his 'gap yah'...and I think the conclusion was that Red Dog's version was OK, but nowhere near as good as the genuine US article...which to be honest could be said of all the food we had at Red Dog Saloon, and, in fact, of most American food in London! 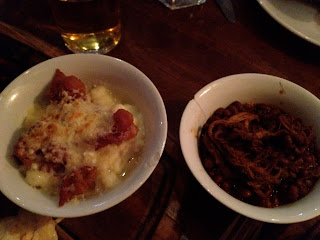 Finally, my 15 year old brother, exhibiting a standard teenage-boy-sized appetite, ordered the Devastator burger. This was enormous: three 6oz patties burger patties,  200g pulled pork, six rashers of applewood smoked bacon and six 6 slices of American cheese, all crammed into a soft roll. However, despite the epic list of ingredients, I had a bite and didn't find it to be particularly remarkable as burgers go (although it was definitely big enough to satisfy even the largest appetite!) It was just a little bit...sloppy...and the somewhat average burger patties and the cheap American cheese didn't live up to the tasty bacon and pulled pork elements.

He had wanted to do the Devastator Challenge, but we convinced him not to: we felt that watching him frantically shoving food into his mouth in order to complete it all within the 10-minute time frame could (you know, possibly...) have had a negative impact on the ambience of our meal! 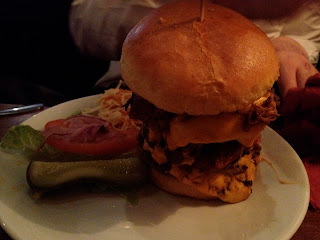 However, we did still have the chance to observe a challenge in action when the guy at the table across from us decided to attempt the Hot Wings Challenge. This was, in a word, disastrous: his dining partner was left alone for the next half an hour, and according to the boys (each of whom went to the bathroom at spaced-out intervals during this period) the 'challenger' spent this whole time staggering around the loos being violently sick. He eventually re-emerged towards the end of the meal, at which point he rejoined his friend (who had spent what must have been a fairly rubbish evening sitting alone, playing on his iPhone) and posed (triumphantly? Although I wouldn't know why...) for a number of photos. Some great in-meal entertainment in any case.

On a final note, the service wasn't the best here - the individual waiters were pleasant enough, but we didn't seem to have been assigned one particular waiter, and were often left neglected for long stretches at a time, when no-one seemed to take responsibility for us. Case in point: our 20+ minute wait for the dessert menu we'd asked for - after which we ended up just getting the bill instead).

Final opinions on Red Dog Saloon were very mixed: I was happy - I'd been craving BBQ, my ribs were good, I'd really enjoyed my coke float and the beans. Youngest brother was unhappy - he'd wanted dessert. Dad was neutral - Philly cheesesteak, after the long wait, was neither exceptionally good nor bad. Other brother had enjoyed watching the epic struggle of the Hot Wings challenger at the next table. And the big jug of beer. But my boyfriend was devastated by his horrible rib experience, and thinks I should warn people not to go here!

So, in conclusion, I guess my search for a really REALLY good, US-standard good, BBQ place in London continues...next stop Pitt Cue.