Situated on a quiet leafy close in Barnsbury, The Albion is a fantastic pub - a perfect spot for a drink (at one of the picnic tables out front, or in the expansive beer garden round the back), and an even better location for a super-tasty Sunday roast.

I first discovered The Albion when looking for somewhere canine-friendly to eat with my parents, and their (cute-but-naughty) dog...And in addition to the impressively laid-back attitude of the staff (which they maintained even when the dog decided to sit on one of the stylishly upholstered sofas*), we were blown away by the fantastic food. 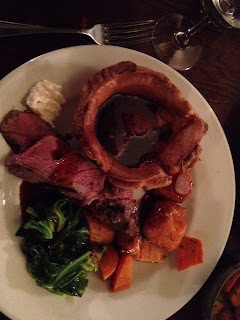 I've had the pleasure of trying two of the roast options here: the whole roast chicken (supposedly to share between two, but my boyfriend gobbled it so quickly I barely got a look in!) and, my favourite, the rib of beef (also for two).

Alongside the platters of meat, the table was heaped with a generous helping of all the trimmings - fluffy yorkshires, a fantastically dark, deeply savoury gravy, roasted carrots , and sweet buttery cabbage all made an appearance. However, the star of the show were the roast potatoes, which were literally (no exaggeration) the best I've ever had. Crunchy and golden-skinned, with the softest, fluffiest insides...1000% delicious. 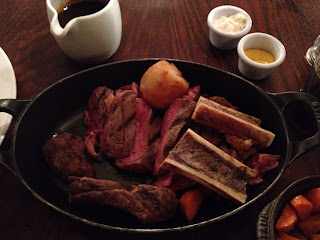 The roast chicken is faultless, but the rib of beef - thick rare slices of beef, served alongside meat-on-the-bone and crispy bone marrow (to be scooped piping hot from a cracked open bone), all dished up in a black skillet - was FANTASTIC. After begging a few tastes from my parents the first time round, my boyfriend and I had to return to get a portion all to ourselves...

The puddings there are also great: sticky toffee pudding with a rich gooey sauce and a cool ball of ice-cream slowly melting on top went down a treat (unsurprisingly); and my boyfriend's dessert the first time round - an intense, rich, chocolate and honeycomb concotion (I've forgotten the name) - was incredible (he had to fight off the attack of three spoons, and even the dog looked hungry!)

The only fault I could find with the place is that you have to book in advance - I've tried to go with friends at short notice, and it really does get fully booked, so make sure you call ahead!

*he likes to think of himself as a human