While I have all but given up blogging nowadays, this was one meal I thought was worth the write-up. I'd been dying to go to Dinner since it first opened, and finally got my wish when my boyfriend took me there for an anniversary meal a couple of weeks ago. 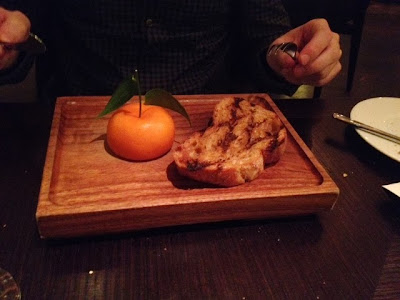 Situated in the Mandarin Oriental hotel, the decor was elegant and understated, with none of the flamboyance I would have expected from Heston Blumenthal. The general vibe was more suit-and-tie business dinner than Mad Hatter's tea party, but it was very chic nonetheless. 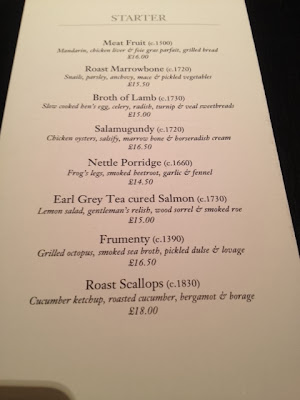 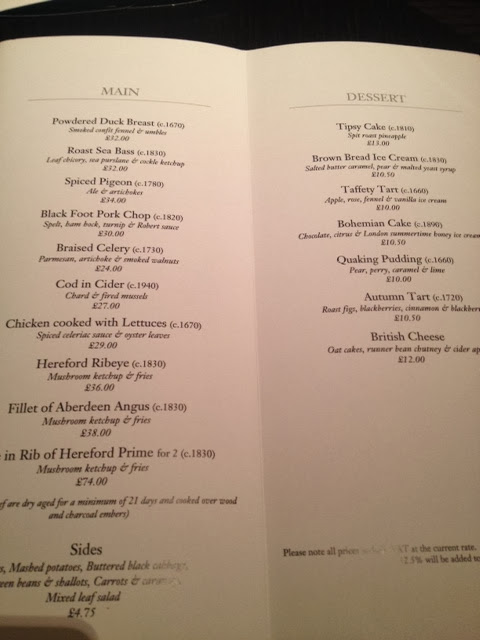 We were led to our table by an immaculately dressed waiter and settled down with a basket of bread and a bottle of bubbly to peruse the menu. As everyone probably knows by now, the menu is based on traditional English recipes, dating anywhere from the 1600s to 1940, and encompasses a range of dishes, from the unusual (nettle porridge...) and the creative (...meat fruit pate...) to the relatively mundane (...steak and chips).

To start I ordered the scallops with cucumber ketchup and roasted cucumber. The scallops themselves - always a favourite for me - were delicious - plump and sweet and perfectly caramelised; and the roasted cucumber was surprisingly tasty. I have never had cooked cucumber before (and have never wanted to!), but it was actually very good - fresh and salty with a firm, juicy texture. 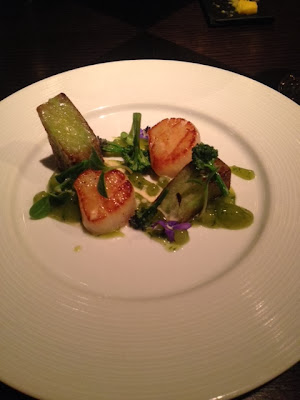 Meanwhile, my other half sampled the famous meat fruit - a globe of chicken liver and foie gras pate artfully shaped and coloured to look exactly like a mandarin orange. Despite being a pate-hater, this was so good that even I could appreciate it. 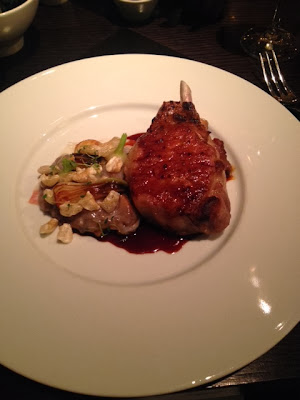 For the main course, I ordered the blackfoot pork chop. Served rare (against the long-standing tradition of serving pork well-done), it was delectably juicy with a delicious and delicate hint of smokiness. I can honestly say it was the best pork chop I have ever eaten (and quite possibly worth a return visit in itself).

My boyfriend (unadventurously) opted for steak and chips. I was disappointed to discover that these were not Heston's renowned (and much imitated) triple-cooked variety, but rather some fairly standard shoe string fries. The steak was good though, and the mushroom ketchup was an interesting touch, but it was rather a wasted order, I thought, compared to some of the more interesting menu items. 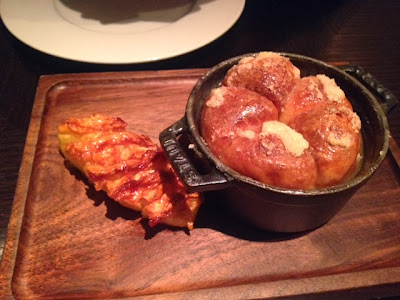 For dessert we split another famous dish, the tipsy cake (served with spit-roasted pineapple) - which was excellent but a bit less dramatic than I had envisaged - and the home-made ice-cream. 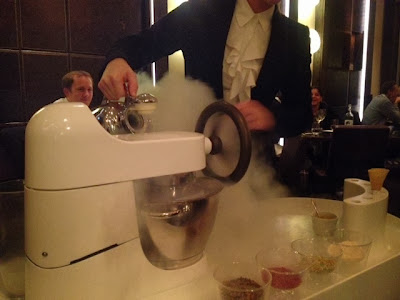 I was very glad we decided to get the ice-cream - up until this point the meal, while delicious, was rather lacking in the theatrics which I had been expecting (lots of sedate business diners and a conspicuous absence of bangs and fireworks...)

Made at the table in a machine which resembled an old-fashioned sewing machine, the ice-cream making process involved liquid nitrogen and impressive billows of steam. Once firm, the ice-cream was served in a miniature cone, rolled in the topping of your choice. 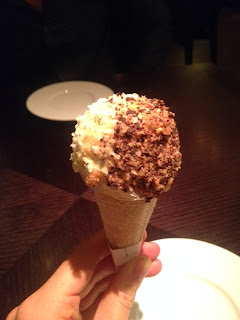 All in all, it was a fantastic meal, and despite being slightly disappointed by the rather subdued atmosphere, the standard of the food definitely reinforced my determination to try the Fat Duck some day in the future.